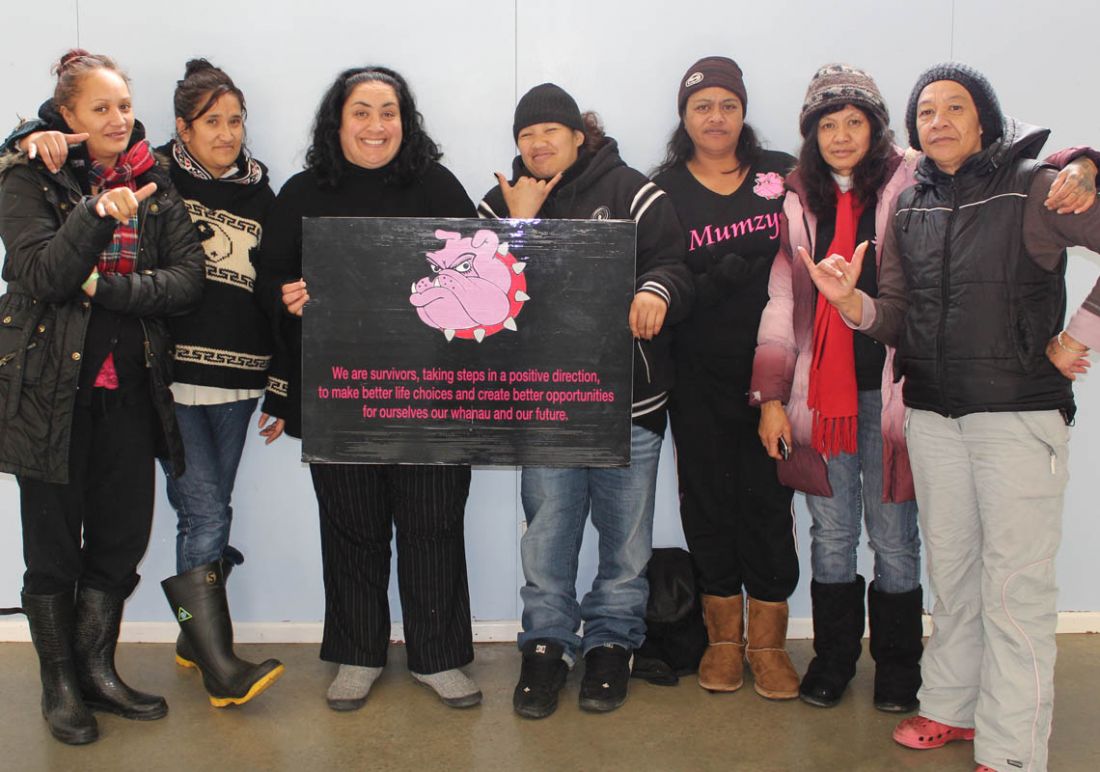 At the last ALAC conference, six women gave a presentation on what they had done in their Porirua community with ALAC funding – and received a standing ovation. What’s unique and surprising about this is the six were all gang women. Their husbands, brothers or fathers are members of the Mongrel Mob, a group most don’t associate with doing community good. Matters of Substance met the Mumzys and was pleasantly surprised.

The Mumzys was started by Liz McMillan-Makalio, who is married to a senior member of the Rogue Chapter of the Mongrel Mob, and Maria Burgess. They are supported by Wesley Community Action, a non-profit agency active in Waitangirua, and five generations of Mob women are involved.

The idea for the group started when the pair was discussing what they could do to help Mob women get themselves and their children out of the ruts they were in and how they could support each other in a safe and positive environment.

Talking about the havoc wreaked by the typical gang lifestyle led to planning a memorial day for all those who had died from alcohol, drugs and violence in the last 30 years.

“We got the girls involved and started researching. We actually came up with 78 names,” says Liz.

The day was called Life Without You and saw Mob men, women and children releasing helium balloons into the sky bearing the names of those who have died.

“The day was such a success, we started thinking about what we could do next, and it all took off from there,” says Liz.

“We got some funding to promote ALAC in the community, and one of the things we did was hold a drug and alcohol-free weekend. This was the first time many of the girls had gone a whole 3 days without booze or drugs, so we had to find some activities to keep them busy.”

The Mumzys painted fences around the kōhanga where their tamariki and mokopuna go. They even built a fence with the help of their menfolk, weeded the gardens and mowed the lawns.

“The women absolutely loved it,” says Liz. “Most didn’t think they could do it, but they did, and they were really pleased with themselves!”

The group has now been going for 20 months, attending outings, sharing activities and organising workshops about “all sorts of crazy things”.

“We’ve done first aid and save a mate classes; we’ve had a dietitian in and a fitness instructor. A lot of the girls are heavy drinkers or drug users, so fitness classes did them a world of good, and it was great to learn about how what you eat affects your health.”

She says support from the Mongrel Mob men has been excellent.

“They’re like our silent partners, and they’re often there, taking part and helping out.”

The group organised a Halloween disco for the entire community, and the men manned the barbecue and helped set up the hall. One patched member even won the prize for the ‘best parent dancer’ in the father and son dance competition.

Liz says the Mumzys are highly spoken of in the community too.

“The girls want to remove some of the stigma associated with them, and I think they’ve really done that.

“Three are members of the Whitireia Community Law Centre Panel, representing the Mongrel Mob. Five are studying social services at Te Wānanga o Aotearoa, and another is the trustee of the local Māori Women’s Refuge.

“Many of our mums do volunteer work with Wesley, and we actively help the council to find and deal with taggers.

“These women are definitely leaders – they are real movers and shakers!”

Alcohol and drug use is still a factor for most, however.

“It’s the norm and part of the lifestyle,” says Liz.

“The girls don’t really want stuff like drugs in their lives, but they’re just not quite sure how to get rid of them.

“But now they’re much more aware and empowered, and there has definitely been a drop in use. One Mumzy has become completely drug and alcohol free.”

The turning point for Liz came 14 years ago when she was offered a job working for Wesley Community Action. She had spent much of her life stealing, drinking and taking drugs and had been to prison twice.

“I was actually quite happy with my life, when a friend rang and said this group was looking for workers in the community, and he thought I’d be really good at it.

“I started doing casual work with local youth, and I was good at it, because I had been there myself and knew what they were thinking.”

And working with others was a real eye-opener for her.

“Mixing with people outside my circle and watching how they were living was a real motivation to change. I didn’t understand a life without drinking, drugs and stealing because no one had taught it to me.”

She has nothing but praise for the Wesley Community Action and says they have done untold good in the community.

“If it wasn’t for them, things would be so much different here. It’s amazing the way they are willing to take risks and open their doors to anyone – Mongrel Mob member or not.

We are survivors taking steps in a positive direction to make better opportunities for ourselves, our whānau and our future.