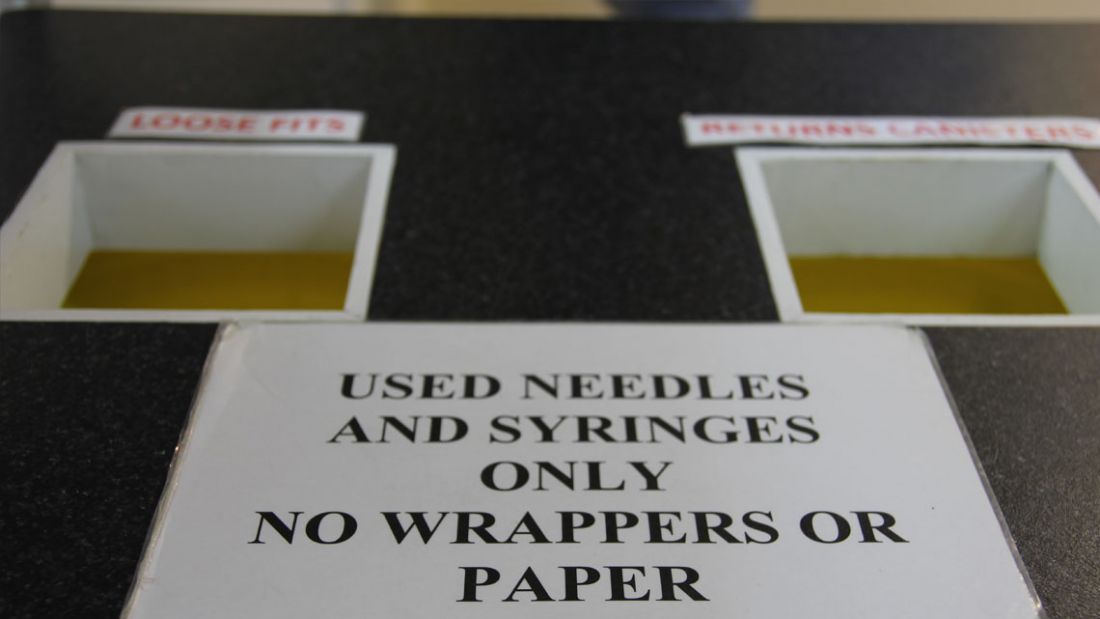 Challenges to setting up a needle exchange

The cry “Not in my back yard!” is often heard when communities are confronted by a social solution they don’t fully understand. But when implemented with persistence and care, harm reduction initiatives like needle exchanges can win out over fear and misplaced loathing. Rob Zorn examines two communities where needle exchanges now work quietly and effectively.

Most right-thinking people would agree that needle exchanges are a good idea. Few of us would want to have to use one, but they help stop the spread of infectious blood-borne diseases like HIV and hepatitis C, and we all benefit from that.

But how would you feel if one opened across the road from your home? What would it say about you or your neighbourhood if the view outside your window included an injecting equipment dispensing machine and a mounted sharps disposal bin? What would happen to your house price, and how often would you have to shield your kids from dodgy druggies doing dastardly deals on your doorstep?

The setting up of two needle exchanges in recent years has illustrated that NIMBY (not in my back yard) syndrome is alive and well in New Zealand. In Masterton (2008) and Rotorua (2010), objections from fearful community members were among the obstacles that had to be overcome.

The Masterton clinic came about as a result of requests from the community. A local alcohol and drug unit and an active group of local consumers were concerned that having to travel as far as Wellington or Palmerston North for equipment was becoming a barrier to sterile needle use in the Wairarapa. But it wasn’t popular with everyone.

“There were lots of stakeholders involved, and many had little understanding of how blood-borne viruses target hidden populations involved in covert behaviours like injecting drugs and how easily those diseases can spread into the general population.

“There were the usual fears the exchange would be dealing drugs or become a hangout for unsavoury people. Others were worried kids might get into the disposal containers and start playing with discarded needles. Business owners on either side of the premises – one a car dealer and the other a tattooist – were quite vocal and tried to rally the community against the exchange.”

The Rotorua outlet was more directly a New Zealand Needle Exchange initiative based on distribution information – and because the one pharmacy dispensing needles there was under pressure to meet demand. There were a few objectors, but the community’s initial reception was more muted than in Masterton. A potential landlord was identified who visited the Hamilton exchange and came away satisfied, and the Council was quite supportive – until the exchange applied for resource consent to provide an electronic dispensing machine and sharps disposal bin for after-hours use.

The Council turned the application down, saying the exchange had not demonstrated that the 24-hour electronic dispensing machine and disposal facility wouldn’t have an adverse effect on the character of the surrounding area. They also said there was a potential for disturbance from clients arriving by car at night and from the activation of security lights.

Ironically, two other 24-hour businesses were already operating in the neighbourhood, one a noisy trucking firm. This convinced Hamilton Needle Exchange Manager Denise Gemmell, who was in charge of establishing the Rotorua exchange, that the refusal was both unreasonable and discriminatory. She visited 20 homes in the neighbourhood and managed to get written support for the exchange from 19 of them.

A lawyer was also engaged to argue that the refusal was groundless in that the exchange had minimised all potential harms and was in full compliance with the law. The Council eventually relented, and the dispensing machine and sharps bin were installed.

There’s actually little a community can do to stop a well organised needle exchange from being established, and both Masterton and Rotorua exchanges went ahead without further incident.

Nevertheless, the New Zealand Needle Exchange and the Ministry of Health will do what they can to ensure neighbours and those affected are aware of what’s happening, that their fears are allayed and their questions answered. In Masterton, a series of public meetings was held, and in Rotorua, Denise Gemmell visited all neighbours in the vicinity personally. In both towns, Police were informed so that co-operative relationships could be established.

Ms Gemmell says the media sensationalises people who inject drugs and their effect on the community and paints a picture that is far from the truth.

“The reality in New Zealand is that most intravenous drug users using needle exchanges are living stable and productive lives. They’ve often got families and want to use clean equipment because they are motivated to keep themselves and others in their lives safe. They have no desire to make trouble and would seriously prefer not to be noticed at all.

“In fact, communities need to be aware of the fantastic service needle exchanges offer them by helping to keep their intravenous drug users safe, informed and disease free.”

So are most local residents aware of the great service being run in their neighbourhoods? Probably not, but most would not even be aware the exchange was there in the first place.

Needle exchanges tend to keep a low profile. Signage is very limited and often little more than small blue universal needle exchange arrows and window stickers. You probably wouldn’t recognise them if you weren’t already in the know. Dispensing machines and disposal containers are easy to get to but not visible from the road. The dispensing machines are protected by a security code only given out to clients, and it would be impossible even for the most resourceful of children to break into a sharps disposal bin. Short-term parking is readily available, and clients come and go quickly, quietly and with a minimum of fuss.

As a result, neighbours seem either quickly to forget about the exchange or to see it as of no concern. Masterton Exchange Manager Brendon Olsen said there was not a single incident with either the car dealer or the tattoo parlour owner once the exchange went ahead and that relations quickly became neighbourly. “The car dealer guy was just a bit old school, but he changed his tune and seemed to accept us once we were there.”

Detective Sergeant Rick Joblin, who was Area Intel Manager in Masterton in 2008, said he remembers some initial community concerns that unpleasant characters might start loitering outside their new “resort”, but he said that hasn’t transpired at all.

“I can’t remember a single complaint or any time we’ve been called there to deal with trouble. Quite frankly, for us the needle exchange just isn’t an issue.”

Denise Gemmell says law enforcement in Rotorua has been a little more guarded with its support, but that she is also unaware of any complaints or Police involvement with the Rotorua exchange.

“On the whole, New Zealanders are generally a pragmatic and egalitarian lot. Once you explain the benefits to them, they tend to take a live and let live attitude and just get on with things. There will always be discomfort with drug use, but once they see nothing nefarious is going to happen in their back yard, many actually become quite supportive.”

And if there’s a needle exchange on your street and you’re worried about your house price when you’re selling, just don’t tell the new buyers. Chances are they will never know.

What do Needle exchange programmes do?

Equipment supplied includes needles and syringes, swabs, butterflies, filters and vials of sterile water along with sharps containers for the safe disposal of used injecting equipment.