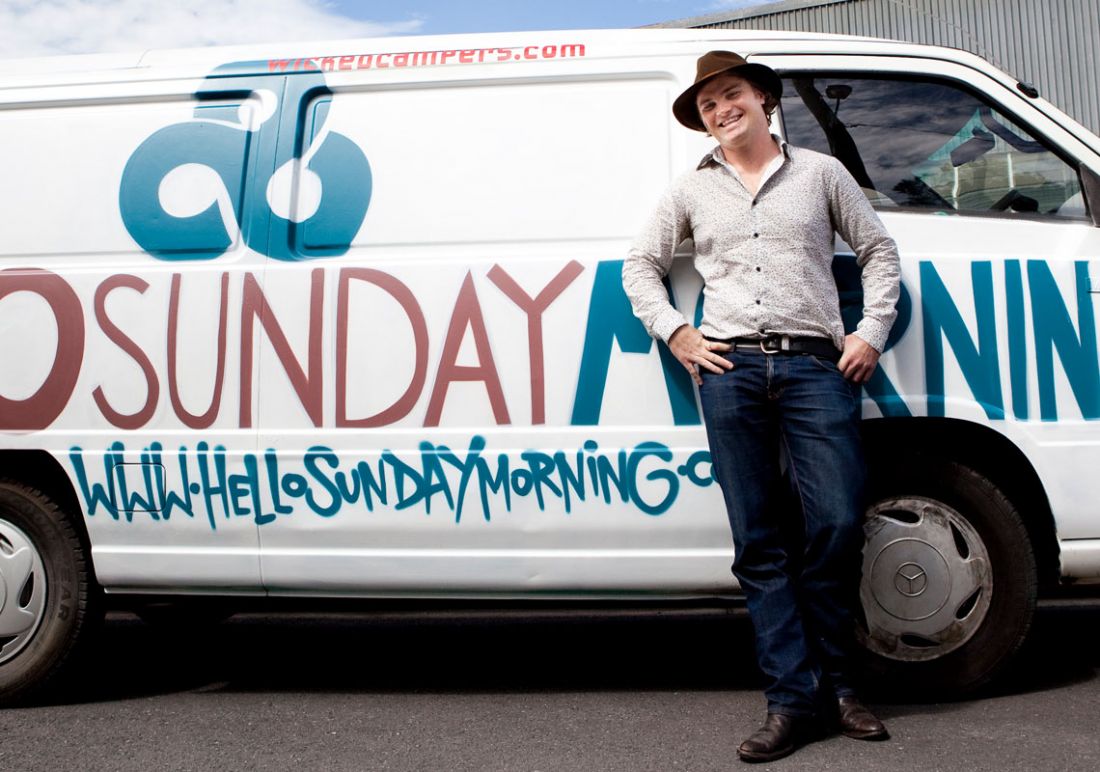 Twenty-four-year-old Chris Raine says he’s really no different to any other young Aussie bloke his age. He likes the ladies, loves a laugh and certainly enjoys a drink or two. While he says he’s always been pretty ambitious and motivated, he doesn’t think that makes him all that unique.

Chris is the driving force behind Hello Sunday Morning, a community of bloggers who challenge themselves to go without alcohol for a set time (3 months, 6 months, a year) and share their experiences online.

It all started with a hangover-inspired epiphany late in 2008. Feeling “bloody awful yet again” on a Sunday morning, Chris began thinking about how much more he could be achieving if he wasn’t drinking so heavily and so regularly.

He’d also been reading how Australia’s binge-drinking culture cost the country over AUS$15 billion and was responsible for the death of more than 260 young Australians each year. But he felt the government’s fear-based advertising campaigns designed to warn young Australians off the drink weren’t getting through and just didn’t seem relevant.

In what seemed to many like a rash act of madness, Chris decided to give up the booze for an entire year and spend that time seeking an understanding of why binge drinking is so entrenched and what it would take for a young Australian to become genuinely nonreliant on alcohol – emotionally, socially and psychologically.

That it seemed like madness is indicative of a culture where alcohol is so thoroughly normalised. His friends said they didn’t believe he could do it, and one suspects that was the last straw of motivation he needed.

Chris began blogging his experiences at Hello Sunday Morning as a way of remaining publicly accountable. At first, it was all about himself, but a few months in, he began encouraging others to join him, and the blog has slowly grown in participants. At the time of writing, 160 people have either completed or are currently doing a “Hello Sunday Morning.” Most participants are Australians, but several blog from overseas, including at least one New Zealander.

One thing he wants people to understand from the outset is that Hello Sunday Morning is not primarily about drinking less.

“It’s actually about living more; living the best quality life you can. You can’t be living life to the fullest and achieving your personal bests when you’re getting pissed every weekend, but for me the focus should be on what’s being gained, not on what’s being lost.”

For Chris, that meant rearranging things in his life so that he could embrace the challenge to do everything a young, single bloke would want to do, but all without the booze.

“I wanted to be able to go nuts on the dance floor, laugh myself stupid with my mates, go out and pick up – all the things I would normally have only done after a fair bit of drinking,” he says.

“People who don’t need alcohol to relax and be themselves are the people I admire most. I’m inspired by people who rely on their own faculties, who challenge themselves, and I wanted to become more like that.”

He says others join to set and achieve very different goals, and that’s fine with him. The aim is for everyone who does the programme to achieve positive transformations in their lives and, by regularly blogging about those changes, influence those around them. He’s a firm believer in the power of storytelling and the importance of social media.

But he warns that, while a lot of people do Hello Sunday Morning because they don’t like how much they’re drinking, it’s not a substitute for treatment.

“It’s not something that will cure you if you have a serious alcohol problem. We’re not a church group or Alcoholics Anonymous with a 12-step programme. Hello Sunday Morning is a tool for people who want to challenge the priority alcohol has come to hold in their lives.

“Our culture forces us into drinking situations. Our identities become entwined with drinking. Hello Sunday Morning gives us a break to get a perspective on that and the courage to believe it doesn’t have to be that way.”

So what was it like going a year without alcohol?

“To tell the truth,” he says, “It was a bit like stepping out into a wilderness of unfamiliar territory. The first 3 months were filled with ups and downs. At times, it felt like a large part of my life was missing and it was hard, but then it began to plateau. After 6 months, it became quite normal, and by the end, it just wasn’t a big deal at all.”

In fact, as the end of the 12 months approached, Chris felt a sense of apprehension about stepping out of the alcohol-free architecture he had created for himself, but the transition went pretty smoothly.

“The first night I could drink again, I didn’t feel all that good about where I was so I decided I wouldn’t drink. It was easy. It wasn’t a battle and it was great to be able to make that decision. The second night I had a couple of drinks and thought I could take or leave the woozy way it made me feel.”

Chris now enjoys alcohol but keeps tabs on himself and stops as soon as he begins to first feel its effects.

“Too much alcohol and you lose motivation and productivity, which is a real downer. I’ve got places to go and things to do that are so much more important.

“Being alcohol-free for an entire year was enough to give me a real sense of objectivity I can continually return to. I know that life can be better than great without drinking, and being able to transcend all those cultural triggers around alcohol is actually pretty amazing; very empowering.”

He’s looking forward to doing a second Hello Sunday Morning just because he enjoys the intensity and focus it brings.

The hope is that Hello Sunday Morning will catch on and eventually go quite global. Most people have 150 others in their social circle whom they could influence, the website says, either to do the programme or to just positively influence the drinking attitudes and behaviours of those around them.

So if you can set aside 3 months this year, why not consider giving Hello Sunday Morning a go? It doesn’t just have to be about alcohol. We could all do with some extra focus and positive goal setting.

As one Hello Sunday Morning participant said, it all comes down to self-belief and confidence – and explaining this is why you’re not currently drinking can work as an “excellent pick-up line."

Find out more and register at www.hellosundaymorning.com.au