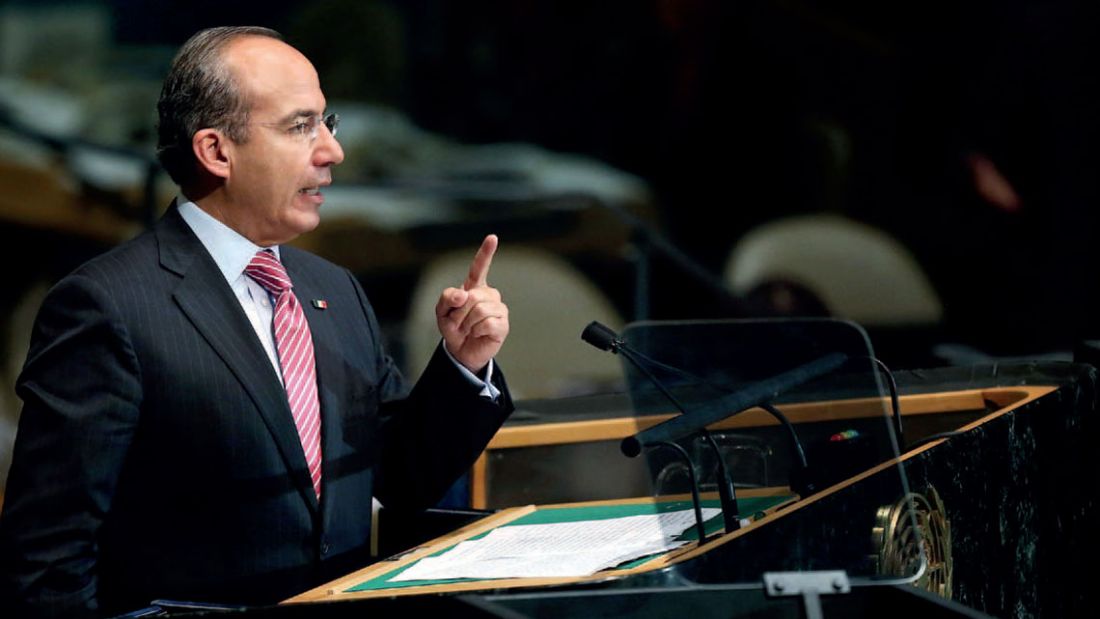 Are we witnessing the beginning of the end for the global War on Drugs? Attacks on drug war ideology are coming from all quarters, argues Russell Brown, to the point where the United Nations has been forced to act. But how much regard the UN will give to the widening calls for reform remains to be seen – and not all the signs are good.

No one expected outgoing Mexican President Felipe Calderon to make the speech he made to the UN General Assembly in September 2012. Calderon, the staunch drug warrior, called time on the Drug War.

He begged member states – and in particular wealthy nations that account for most illicit drug consumption – to examine the “limits” of the war on drugs. “Well intentioned efforts” to try to keep drugs out of the hands of young people via legal enforcement had led only to a black market and enormous earnings that provided criminals with power and “an almost unlimited ability to corrupt”. Wealthy countries, he said, needed to explore “regulatory or market-based alternatives” for curbing the illicit drug trade.

In the official UN summary of Calderon’s speech, you will not find these words – at least not in the context in which they were uttered. His scathing criticism of the Drug War is absent from the record.

“The summary was scandalous in itself,” says Sanho Tree, the former military historian who has run the Washington-based Institute of Policy Studies Drug Policy project for the past 14 years.

“They doctored it to make it sound as if he gave a rousing endorsement of the Drug War – everyone needs to redouble their efforts and so forth – and then the entire video disappeared, along with the summary. It’s unprecedented as far as I can tell. A head of state giving a formal speech at the opening of the UN General Assembly and having it expunged from the record.”

Both summary and video are now back on the UN website, if you know where to look, but there is no transcript. Casual readers will need to navigate half an hour into the clip to hear Calderon’s strongest criticisms. Such are the politics of global drug policy.

But there is no removing the fact that, on the same Wednesday that Calderon made his speech, two other Latin American leaders told the Assembly the same thing.

“The premise of our fight against drugs has proven to have serious flaws,” said President Otto Perez of Guatemala. Once-inveterate drug warrior and Colombian President Juan Manuel Santos demanded “an objective and scientific” search for “better options to battle this scourge”.

Collectively, the three leaders formally asked UN Secretary-General Ban Ki Moon for a review of the organisation’s drug policies. In November 2012, along with the leaders of Costa Rica, Belize and Honduras, they won a UN vote to set a special session on global drug policy for 2016.

The South Americans are not alone in their desire for reform. Two years ago, Germany, Britain and two dozen other countries tried to have the phrase “harm reduction” adopted as a principle in the 10-year political declaration, which embodies the UN stance on drugs. The advocates of the longstanding zero-tolerance philosophy – principally the US, Russia and Japan – prevailed, but the rebels made it clear they would regard the declaration’s eventual compromise language as equivalent to a harm-reduction stance.

Nonetheless, Tree is cautious. The UN is “very skilled” at deflecting such initiatives, he says. “It’s the dark cul de sac down which drug reform proposals are lured and quietly strangled.” The key reform development may in fact be the state ballots in the US general election, where voters in Colorado and Washington State opted to legalise the recreational use and possession of marijuana. In a statement that caused some surprise, the re-elected President Obama said federal enforcement in those states was “not a priority” for his administration. Tree wasn’t as surprised as some.

”There’s not a whole lot Obama can do with any credibility. Technically, legally, he can do any number of things – and he could probably take it to the Supreme Court and win. But it would be an absolutely pyrrhic victory. And one that’s not in the interest of the executive, legislative or judicial branches of government.

“What are you going to do? Send in 10,000 DEA officers to arrest people for smoking a joint? That would be a silly waste of resources. And what if they go all the way to the Supreme Court and the highest court in the land says ‘No, no, no’ – and the people say ‘Screw you. We’re going to have a giant smoke-in in front of the federal building’? Then you have a legitimation crisis, which is not supposed to happen in advanced democracies. That’s a total breakdown of governance.”

The wider implications, he says, lie in the way “the drug war in general is driven by US domestic politics. By domestic posturing. And you have two states in the US, including a major swing state, where marijuana got more votes than Obama – or Romney. This gives international actors, particularly Latin American countries, a lot more political space. They can say, look, if the citizens of your own country are starting to turn their back on the Drug War, where is the legitimacy for you to force these policies down our throats?”

Tree is at pains to note that, while he believes the US has reached a “tipping point” on cannabis reform, dealing with hard drugs is some way off yet.

“Even the word ‘legalisation’ is a very awkward term to use, because most people I know who support ending prohibition don’t regard it as the same as legalisation. It’s not selling heroin to children in candy machines – it means different types of regulation, some of which would be stricter than others. It doesn’t mean we have to legalise – but draconian penalties, if there’s high demand in a black market, are counterproductive.

“I don’t know what an ideal policy would look like for this country or for other countries. However, we know what doesn’t work – the current system doesn’t work. And we’re not allowed to find out what does work because we can’t experiment because the prohibitionists have had a lock on policy for so long. So the current policy is not only never going to provide a solution – it is the obstacle to us ever finding a sustainable solution.”