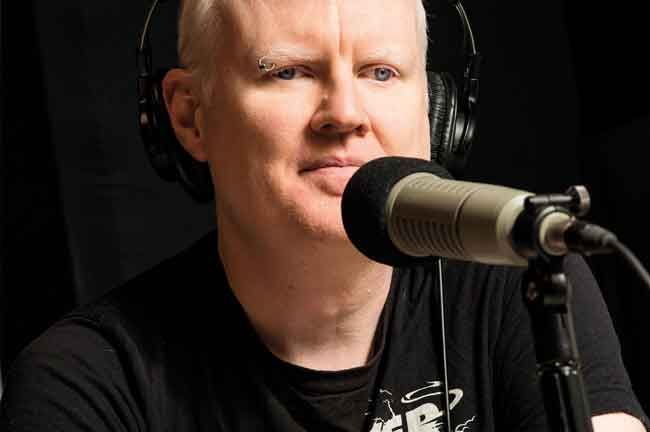 Crackdown is a new monthly drug and drug policy podcast from award-winning documentarian and long-time community organiser Garth Mullins. Each episode tells the story of a community fighting for its life.

Q Where did the idea of the Crackdown podcast come from?

A: I’m an injecting drug user from back in the day and I’m on methadone now. Here in Canada I’m now living through my second overdose crisis. Making radio is one the skills I picked up. I’ve also been fighting against the drug war for a long time, and the kinds of stories I want to tell are not making it into the news, so I set up the podcast.

Q Why is it important to hear from PWUD (people who use drugs)?

A: Because everyone else gets it wrong. The media gets it wrong. Policymakers get it wrong. Researchers get it wrong. Everybody who tries to do something about drug policy without us just fucks it up. So we realised we’ve got to make our own media. There’s lots of conservative media in North America. They call us zombies, scumbags and criminals. When journalism is saying things like that, basically we are backed into a corner where we have to argue for our own humanity. Nobody should have to do that. But here we are, so that’s the job.

Q How is the podcast going?

A: It’s going great, going better than I ever hoped it would. For example, we’re getting a lot of listeners – we went to the top of iTunes here in Canada right away. Even some of the Cabinet ministers here in Canada are listening in apparently. So it’s been fantastic.

It’s also been terrible and heartbreaking. During the making of our second episode, we lost a member of our editorial board, Chereece Keewatin, who died. As a community, every week we are losing people to the drug war here, to the overdose crisis. You have to continue to do the work during waves of loss and destruction. That’s also something that a lot of us have built up a tolerance for. But it does have an effect. We miss our friend Chereece massively.

Q Does the podcast contribute to change or debate?

A: It’s actually really hard to tell. We’ve heard that some politicians have listened to the show, so they might get our message directly. People are using it as an organising tool. So they’ll hold a little listening party with a few people gathering around to listen to the podcast and have a discussion afterwards. Then maybe the discussion leads into some type of action. We’re putting an accessible organising tool in people’s hands.

Q Have some of things you’ve learned surprised you?

A: Sure. We just went to Portugal, and thought, “Hey, that’s great, I can go there and use drugs and that’s okay.” But it’s actually not that simple. People projected a lot of hopes on the decriminalisation model. However, I grew to understand that there’s nothing in Portugal that protects them when the overdose crisis comes calling as it eventually will everywhere, I think. Another lesson is looking at people from past struggles, like Act Up during the 80s, early 90s HIV AIDS crisis and being inspired by their activism. They were able to organise and withstand waves of loss amongst their members and leaders. And their tactics eventually broke through.

I think maybe we learn and relearn that nothing is ever given free, that you have to demand and arm twist any rights that you’re able to acquire from leaders, from politicians. You need to do the organising. There are no shortcuts. There is no benevolent decision maker somewhere that is going to finally hand you salvation, so we’re going to have to save ourselves.

Q Is the language that politicians use shifting?

A: We’ve helped people shift their rhetoric here, too. You can get people to say from high office it’s not a criminal issue, it’s a health issue. But they sure as shit will fucken arrest you for possessing hard drugs. The state is still spending most of its resources on Police but not drug treatment.

This is the mode of the centrist, mushy, liberal politician. They’ll pretend they are your friends, then they will gaslight you, whereas if they are conservative, they’ll be your enemy. I hope it’s not true where you are, but it’s certainly true here.

Q What is next for the Crackdown podcast?

A: We’re working on decriminalisation right now. We’re also doing more work on how colonisation and the overdose crisis are wrapped around each other. Housing precarity and the overdose crisis sort of mutually jack each other up and make each other worse, so we’ll cover this. Another issue is how the crisis is experienced by women differently and sometimes in a sharp and more profound way than others. Policing needs to be called out. They continue to stand in the way of progress.

In terms of solutions we’ve got to cover how the assurance of a safe drug supply could actually end this overnight.

We’re also going to look at how the crisis is different rural and remote places. In Canada it’s often pretty cold, so we’re going to think about how does that change things when you’re forced inside when the temperature is 40 below? What type of different services do you need? What different impacts does that create?

Oh yeah, we’re going to do it all.