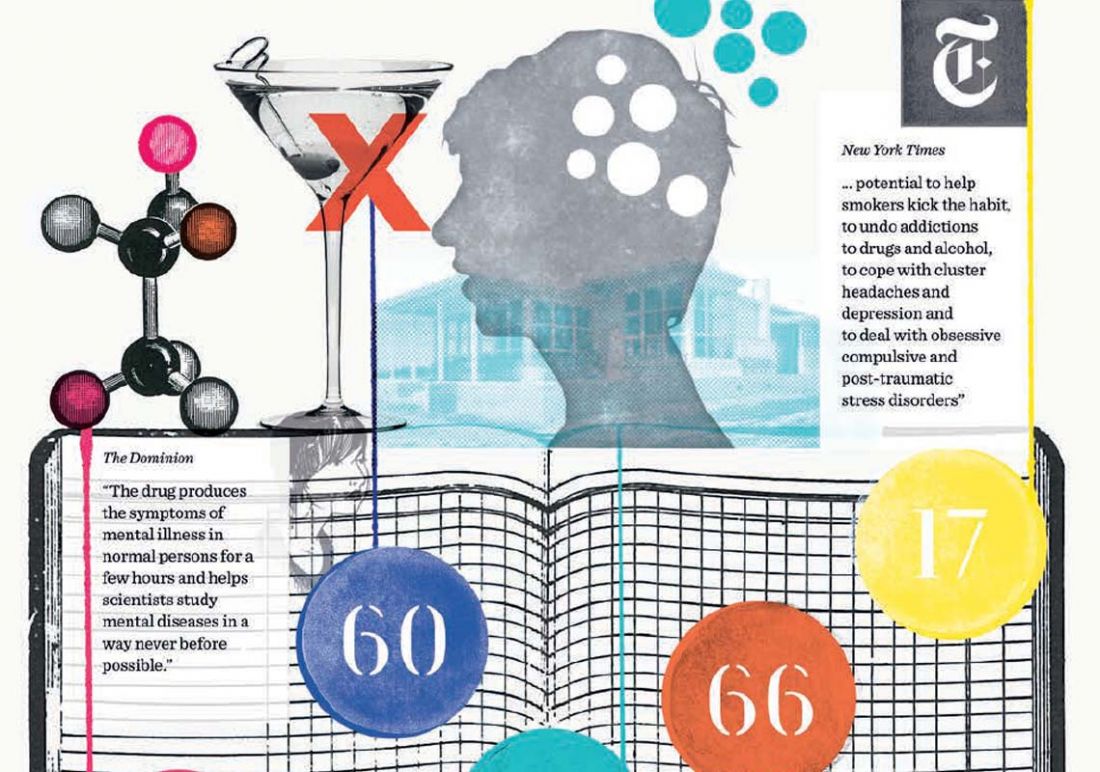 It’s half a century this year since New Zealand followed Britain and the USA in outlawing the mind-bending compound LSD. Less well recorded are the scores of ‘acid tests’ legally performed to treat mental illness here.

Lysergic acid was criminalised on 7 July 1967, the same day TVNZ screened a documentary describing the widespread use of pure Swiss LSD (Delysid) in local therapeutic settings, especially in Dunedin and Christchurch.

Police later arrested a Parnell writer and contributor to the Compass programme for possessing the “nefariously evil drug” impregnated into sheets of blotting paper. His lawyer, complaining of a witch hunt, assured an Auckland magistrate, “there’s no evidence that the youth of this country is being ruined by drugs; there is no evidence that a large proportion of people are taking LSD and cannabis”.

By 1967, LSD was an incendiary topic, already the most famous illegal compound in the world, trumpeted on the cover of the American weekly Time magazine. It was blamed for spawning a counter culture of “turned on” acolytes, a tie-dyed global “underground” with its own newspapers, paintings and posters, nightclubs and fashions, movies and theatre, literature and especially music.

According to American writer Jay Stevens, aficionados named it acid “partially on account of its usefulness in burning off that Greco-Judaic-Christian patina, but mostly because the drug’s technical name was D-lysergic acid diethylamide.”

So what led it to be used so widely in Kiwi psychiatry? The first local reports about “the drug that produces madness” turn up in the mid-1950s, a decade after Swiss chemist Albert Hoffman accidentally discovered its psychoactive properties. The Dominion noted, “The drug produces the symptoms of mental illness in normal persons for a few hours and helps scientists study mental diseases in a way never before possible.”

By 1960, LSD’s potential in treating addiction was widely acknowledged. In 1962, a TVNZ programme showed a Canadian woman taking it to help cure herself of alcoholism. As a storm of criticism blew up, Health Department official Dr Geoffrey Blake Palmer assured viewers that lysergic acid “is most definitely not a drug for general use”.

Dr Blake Palmer, who would later chair major inquiries into illegal drug use in New Zealand (including LSD), suggested local psychiatrists, however, were eyeing it up as a useful tool in therapy. A colleague added, “It is unlikely any ordinary person would be able to gain access easily to such a drug in New Zealand.”

In the USA, misuse of legal LSD was skyrocketing. Auckland folk singer Bryce Peterson was among a handful of locals to privately experiment with it. He’d write a song about his experience, memorably entitled Slightly-Delic. Recorded with his band House of Nimrod, it remains a rare classic of Kiwi psychedelic pop.

By 1964, ‘acid tests’ in therapeutic settings were commonplace in New Zealand. Records show psychiatrists were administering ampoules of Delysid, provided free by Swiss manufacturer Sandoz, to scores of consenting patients. The drug appears to have been in common use across Dunedin – at Cherry Farm, in the psychiatric department at Waikari Hospital and at Ashburn Hall.

The global criminalisation of LSD both demonised the drug and ended this research phase. In May 1966, Sandoz announced it would no longer supply the drug globally because of “misuse by teenagers and beatniks”. The local branch of the Royal Australian and New Zealand College of Psychiatrists complained that “the drug had been found useful and that it was desirable that supplies be continued”.

But only under therapeutic supervision. An unnamed Dunedin psychiatrist, said to have been using LSD in conjunction with psychotherapy, commented, “It would be deplorable if the availability of drugs is dictated by delinquents and hooligans.”

In October 1966, the New Zealand Medical Journal issued the first dispatch from the frontlines of the legal Kiwi ‘acid tests’. Dr David Livingstone’s article ‘Some Observations on the Usefulness of Lysergic Acid in Psychiatry’ showed that, over two years, this Christchurch psychiatrist had administered LSD to 55 consenting patients in 131 closely supervised sessions, each lasting up to eight hours.

In colourful language, Livingstone noted how LSD had attracted “fascinated curiosity, fearful repugnance, reasonable healthy scepticism, and the tender hope of acclaiming an instrument which may make for a major breakthrough in understanding and treating mental and personality disorders”.

He praised “the penetratively healing properties of this psychedelic drug ... an agent of major therapeutic capability, facilitating personality change, and of help in resolving those disorders of the mind and personality which are deep rooted in the life experience of the human being”.

At the same time, he underlined the need to restrict its use to therapeutic settings, warning of the “life threatening personality disintegrating propensities in the hands of unskilled experimenters”, likening it to “making hand grenades available to delinquent youths”.

The article indicates that Livingstone’s sessions at Calvary Private Hospital in Christchurch chiefly involved 100 micrograms of LSD, a relatively small dose. He was prepared for panic attacks, with a cocktail of barbiturates and even methamphetamine on hand to calm participants down.

Within a few months of the government’s decision to ban LSD, a local psychiatrist said the drug was still available for limited study, but its use in therapeutic settings was tailing off. By this time, headlines were telling of suicides, murders and all kinds of dangerous activity linked to the substance.

Half a century on, research shows that the “life threatening personality disintegrating propensities” described by Dr Livingstone were restricted to a relatively small percentage of LSD users.

And as the New York Times reported recently, increasing numbers of scientists are meanwhile revisiting lysergic acid, half a century after its spectacular international fall from grace.

“They are studying hallucinogens’ potential to help smokers kick the habit, to undo addictions to drugs and alcohol, to cope with cluster headaches and depression and to deal with obsessive-compulsive and post-traumatic stress disorders,” the newspaper said.

How long will it be before New Zealand researchers join those in renowned institutes including those in New York, Los Angeles, Zurich and London?