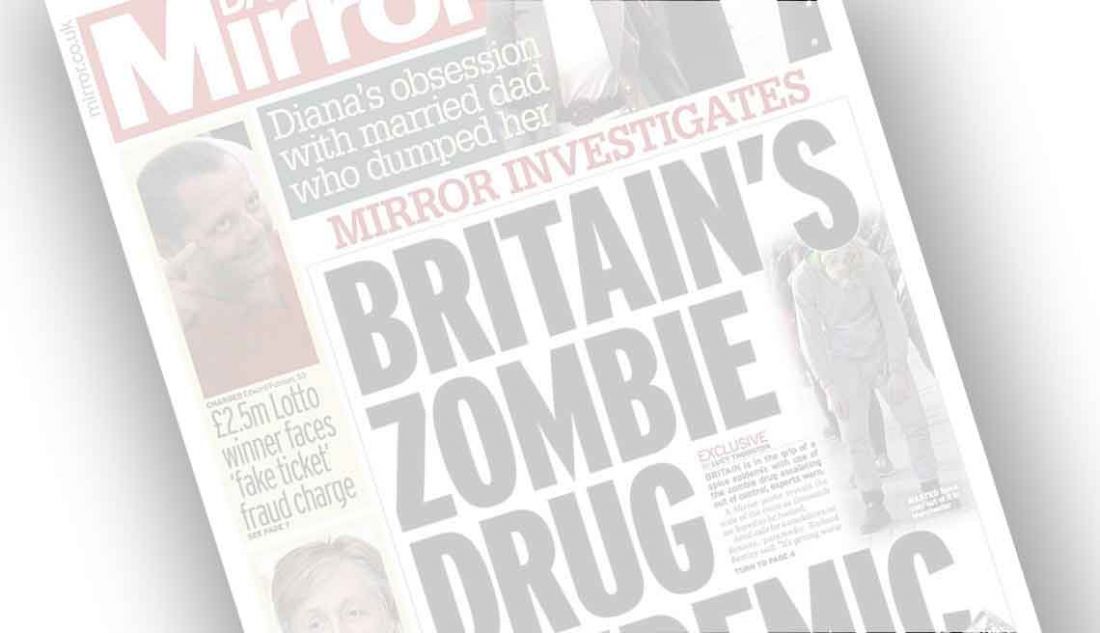 Over the last couple of years, a spate of clickbait articles has emerged using dehumanising language to describe people who have become drug dependent. Scaremongering articles nearly always focus on low socioeconomic communities. Meanwhile, little is said about the vices of the middle and upper classes. When reportage does focus on the illicit drug or drink habits of those who’ve snagged upward mobility, dehumanising and denigrating language is always sidestepped.

The BBC, in particular, has run article after article with “zombie” titles that nearly always focus on people from poor communities who are dependent on synthetic cannabis. Most recently, the BBC ran a documentary that concentrated on the impacts that synthetic cannabis, known as spice in the UK, has had on those living in a housing estate in Wrexham, Wales. My dad was from Cardiff, so I take an interest in how my people, especially those who are poor and addicted, are represented in the media. In the short documentary, people were presented as having no ability to control themselves as the drug takes over and destroys their lives.

There was no mention of how poverty destroys lives and negatively impacts people’s emotional well-being and that clearly drug use in Wrexham is correlation and not causation. Drug abuse does not cause poverty; poverty is a cause of addiction.

The New Zealand Herald ran similar articles with degrading and hyperbolic titles such as, “Zombie apocalypse: An addiction crisis in America”, which focused on opioid use in rural towns. It called the crisis a “national phenomenon” as if an opioid epidemic has appeared from nowhere and drug dependency does not have structural and root causes. The writer then went on to use the word ‘demented’ to describe people who are struggling with addiction.

Stuff even ran an article on a mother who had written a book about her own son’s battle with meth addiction, using the word to describe her son’s behaviour. “I had watched my child turn into an incoherent zombie,” she told Stuff. When family members use stigmatising, and dehumanising language to describe the people they love who are struggling with drug dependency, they are likely to be compounding the shame this person might already be feeling. They are increasing the emotional torment of someone who is already in pain.

There is damage caused by making people into their dependencies – using inescapable labels that vilify people struggling with and who are surviving addiction.

I can promise you that people who have dependency issues with (but not limited to) spice aren’t coming for your tasty brains. They aren’t going to rip your faces off while frothing at the mouth. But what some of us who have drug dependency issues (myself included) are coming for are your false narratives and reductive assumptions about who we are, what we are and what we do. Let’s take a step back from the addiction and poverty myths and look at the facts.

There is little evidence that poor folk are responsible for most of the illicit drug use or that the rich are exempt from the destructive behaviours associated with dependency so intensely examined by media when they occur in poor communities.

The Conversation in Australia reported that people in paid work are more likely to take drugs (56 percent) than people who are enduring unemployment (43 percent). These statistics were compiled by the Australian Institute of Health and Wellbeing.

Statistically recreational drug use tends to taper off when you are poor because, frankly, mostly we can’t afford a steady stream of drugs. Having a job means access to money for MDMA, a regular supply of real weed or whatever tickles your fancy. When the choice is between kai or drugs, the recreational user is going to eat, a person with addiction issues may choose drugs or alcohol either way, but if there is no money well, drug dealers are not renowned for their generous or trusting natures, and there’s always someone who does have the money and is willing to buy.

Unsurprisingly then, the rich can afford their vice of choice, and the middle classes can afford more than people enduring poverty.

The Guardian reported last year that the middle classes consume more drugs and alcohol than people who are living below the poverty line. The report, compiled by the Social Metrics Commission, compared the circumstances of those living above and below the poverty line. It found two-thirds (66 percent) of those who are comparatively well off have drunk to excess in the last year, compared with just 58 percent of the most deprived.

So where are the articles about the endemic drug and alcohol use among the rich?

Why are we not concerned that they will run amok and terrorise their wealthy neighbourhoods? Where are their state-mandated drug tests to keep us all safe?

Way back in 2011, the Drug Foundation published a policy briefing paper in response to the then government’s announcement proposing drug testing people on welfare. The paper strongly advocated against such testing, stating “Internationally, there is very little evidence for significantly higher rates of substance abuse among welfare recipients than non-welfare recipients when socio-demographic factors are controlled for.”

I was personally threatened on multiple occasions with sanctions to my benefit if I failed a dole drug test. At the time, I’d been diagnosed with chronic PTSD, depression and anxiety. I wasn’t able to work because my mental health was so bad. Once, a case worker asked me why I had PTSD. I explained that I’d been raped three months before. Her response? “That shouldn’t hinder your ability to work.” She also reminded me that I could be asked to submit urine for a drug test by WINZ and a potential employer, and if the test came back positive, I’d be subject to sanctions.

I walked out of that appointment feeling waves of humiliation wash over me. I walked into the nearest liquor store, bought two bottles of wine, found a park and sculled as much wine as I possibly could. Journalist Johann Hari, author of Chasing the Scream and Lost Connections, recently stated “We know that inequality increases a sense of humiliation and correlates with depression and anxiety, it can actually cause depression and anxiety.”

The Drug Foundation recommendation went on to say “A recent review indicates that substance abuse among welfare recipients is not a major cause of continued welfare dependency.”

Regardless of evidence that counters negative narratives around poor people or that drug testing people on benefits had no benefit to the people tested, the government funding them or to society in general, the government of the day pushed on with the welfare reform. These sanctions are now under review.

Radio New Zealand reported in 2017 that only 466 had failed the pre-employment drug testing out of about 30,000 tests since 2014, about 1.5 percent. The minister at the time said the results were proof of the success of the shame-based policy in curbing beneficiary drug use.

Imagine what would have been achieved had the taxpayer dollars spent on ferreting out those 466 people actually been spent on drug education or funding recovery respites/holistic rehabs or both.

What needs a major adjustment is our system — not poor people’s attitudes or drug-taking habits.

Poverty is a form of violence. Violence is traumatic. Poverty is traumatic. And what is one of the root causes of addiction? TRAUMA. It isn’t hard to work this out. It shouldn’t be unfathomable for government ministers to know that long-term drug dependency isn’t a symptom of laziness or a moral deficiency.

Dependency does not mean you are a bad person, just like being poor doesn’t mean you are lazy or lack ambition. It isn’t a moral issue – it’s a health issue, it’s a spiritual issue and it’s a social justice issue.

Long-term dependency is, more often than not, a symptom that someone is in deep pain both emotionally and spiritually. That kind of pain leaks into your bones. I’ve felt that pain. It’s a type of pain that you never forget. It follows you. It haunts you. It never really leaves you.