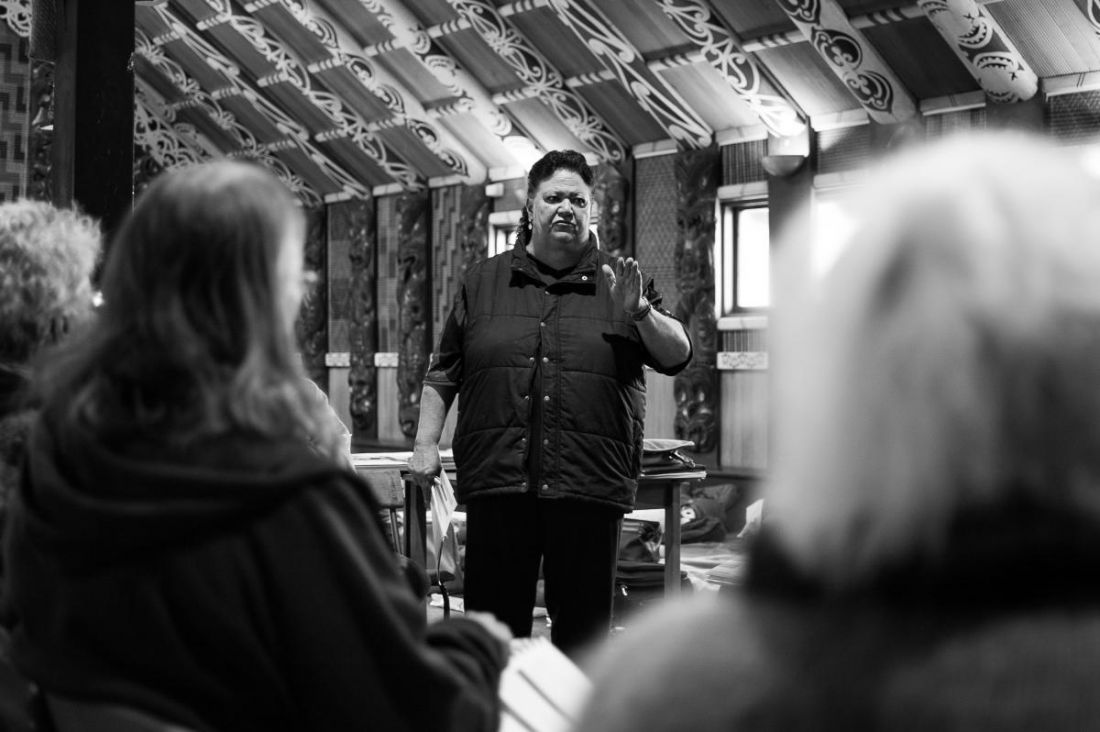 Tihi Puanaki – a driving force behind award-winning kapa haka group Te Kotahitanga for more than four decades – has just won a Lifetime Achievement award at this year’s Pride of New Zealand Awards for her contribution to Māori education. Along the way, she has helped many people kick serious drug and alcohol addictions. Stories and photo by Matt Calman.

Tihi Puanaki looks out across the leafy grounds of Rehua Marae in central Christchurch from the weathered red bench seat at the foot of Rehua’s wharenui. She’s a long way from where she grew up on a Far North farm in tiny bush-clad Matawaia – halfway between Kaikohe and Kawakawa. She describes being raised by her aunt – a whāngai (Māori adoption) arrangement – when her mother fell ill, of being growled at for speaking Māori at her “native school” because “it was hammered that you would progress through English”.

She talks about how at home they didn’t learn Māori but rather “lived it” and how that led to her passionate advocacy for kura kaupapa (Puanaki established the first kura kaupapa/Māori language immersion school in the South Island in 1986). She always loved singing and performing, but it wasn’t until she travelled to Auckland in her late teens that she joined formal kapa haka groups. A move to Christchurch in her early 20s led to the formation of Te Kotahitanga – a group that has won competitions at national and regional levels over nearly 45 years.

When Puanaki talks about how her elders and contemporaries regarded the benefits of kapa haka, she hints at why it’s also helped so many people who have been battling substance abuse.

“They knew it was great for the wairua (spirit). They knew it gave them great joy because they were expressing themselves as Māori. The drug users we’re talking about, the alcoholics who come here trying to find themselves, get their revival and survival on the way.”

Over the years, people battling addictions have naturally drifted to Te Kotahitanga, where they come under the influence of Puanaki’s instruction. Many others have been sent to the group after being released from prison.

“We’ve had whānau in need really, and they just come. They will often send them to us … because they know they’ll be kept in line.”

Puanaki says new members are welcomed to the group and told what is expected. Being part of the group means having to be on time for practices and involves much hard work, commitment and discipline.

Having a problem with drugs or alcohol is no barrier to joining in. It’s something Puanaki would bring up with a new member.

Puanaki says the incentive for new members to stay off any substances in order to be a part of the group was significant. Once involved, people would just gradually heal, she says.

“We would often have functions, and those people would never drug up. They wanted to be a part of the kaupapa of that group, of that whānau.”

Te Kotahitanga member Michelle Manuel nominated Puanaki for the award because she was “deserving of that sort of prestige” and to put kapa haka into the limelight as an option for troubled youth.

“There’s quite an ugly element that’s occurring with our rangatahi these days,” Manuel says. “You can see it on the corners of Eastgate Mall. That’s where they go and hang out, and they get hurt, ultimately. Just this year, I think there have been about two stabbings outside.”

Manuel works in social services, and her partner has worked in the area of Māori mental health. She believes kapa haka is a natural path to bring young Māori who are struggling with drugs and alcohol around to another way of thinking.

“It’s more about the sort of hidden agendas behind getting together under one roof once a week or however many times you meet that drives a sense of belonging for a lot of kids who don’t … feel that they belong anywhere. We see a lot of these kids who just need something to uplift and bring them back into the light.”

It was Māori companionship that Te Kotahitanga would provide for Puanaki when she moved to Christchurch in her early 20s. She was restless and “on a mission” to earn some money in order to travel. Christchurch attracted young Māori from around the country to its trade training schools in the 1970s and 80s. She was living in the Māori women’s hostel when “the boys” from the men’s hostel rang. Puanaki answered the call.

“The boys wanted to form a [kapa haka] group and needed some women. It was all on from there. It just grew naturally out of the need for companionship really. You’re here, you’re lonely for your family so you actually build these strong relationships.”

Puanaki has previously been described in articles as of Ngāi Tahu descent but she is Ngāti Hine, which is a subtribe of Ngāpuhi. The confusion perhaps lies in the strong ties she has developed with Ngāi Tahu, which she describes as her “whānau away from home”. She moved to Christchurch to start her travelling journey but never left. The man she would later marry was one of Te Kotahitanga’s fellow founding members, and their son grew up in the group. She sees many other family dynasties continue to grow through kapa haka.

“That’s why I believe so much in kapa haka as a vehicle. I believe it is the vehicle.”

Manuel says Puanaki’s instruction is revered nationwide in the world of kapa haka, so when she moved from Wellington and searched for a group to join, Te Kotahitanga was a “natural progression” for her.

“My first impressions of her were … someone who was quite strong but still quite welcoming. She will accept performers, more natural performers, but she takes anybody. Anybody, as far as she’s concerned, can haka.”

Manuel says Puanaki teaches pride, patience and perseverance – all things that can help a person overcome an addiction. [X]
“What she does with that sense of belief is she turns them into seasoned performers.”

Puanaki says the strong relationships made within the group, the companionship and the connection to culture are powerful things for people – especially people who are using drugs to fill a void in their lives.

“It’s not so much me growling, it’s the social environment which is positive … and it defeats the buzz of drugs.”

Puanaki says the group has never had specific infrastructure or training to cope with people who have serious substanceabuse issues, but it does offer the simple boundary that, if people want to be involved, they must not use drugs. She also makes it clear that she is not a drug and alcohol counsellor, but says, if people need extra help, there are people within the group who work in that area and can help them. Puanaki says people who are trying to change need constant support.

One performer who had a serious drug problem and who went on to develop his talent and take a senior front-row spot with Te Kotahitanga sticks in Puanaki’s mind.

“He had the skills and everything … then he left that supportive atmosphere and he went back [to drugs].”

Puanaki has witnessed some remarkable changes in people’s lives. One of her top performers was released from prison and went to addiction treatment centre Odyssey House for a while before coming to the group. It was the social environment of Te Kotahitanga in which he thrived, she says.

“He absolutely loved us.”

Another man came into the group from a background of prison and drugs and has risen to the status and responsibility of a kaumātua/elder.

“One of our kaumātua in particular … decided he wanted to change his life. Now he’s a kaumātua who sits on the sacred seat, on the taumata tapu in the marae, to mihi. That’s a big deal.”

Puanaki’s teaching background has stretched across many organisations. She’s had long associations with Te Kura Whakapūmau i Te Reo Tūturu (kura kaupapa) and Aranui High School. She also teaches tikanga Māori to adult students at Te Wānanga o Aotearoa. She was awarded the Queen’s Service Medal in 2003 for her contribution to Māori education.

Puanaki says even if people leave the group the lifelong bonds remain.

“You never ever lose those. You can’t stand closely to somebody for an hour and smell their stink and feel their breath without either loving or hating them. These ex-prisoners come into that, and then when people aren’t used to it, it’s actually beautiful.”