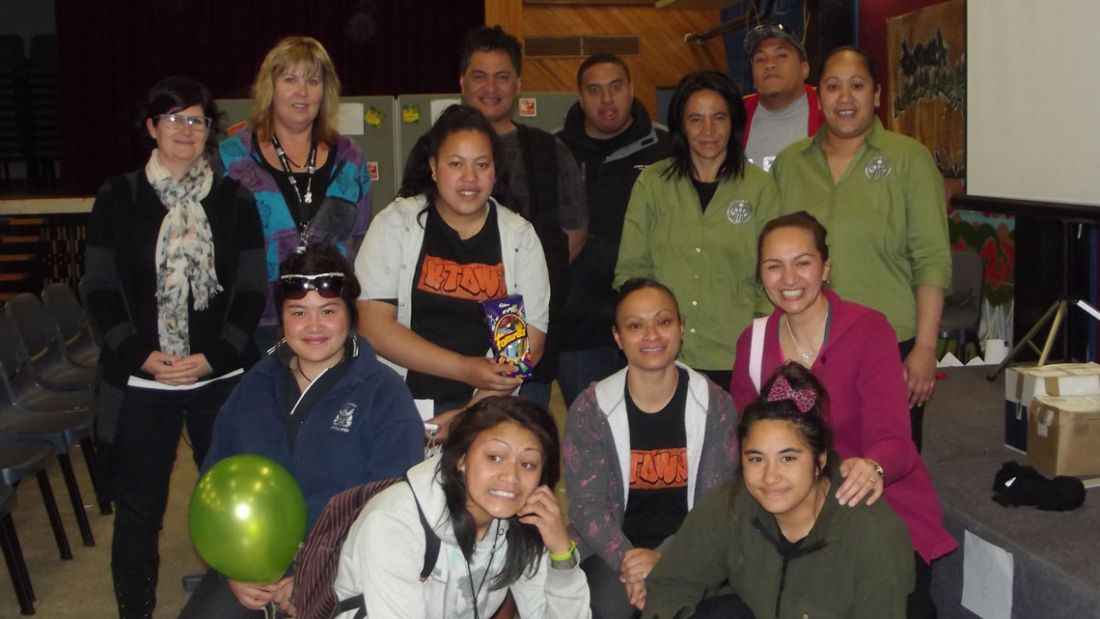 A new programme for students and by students has helped a troubled little community get back on its feet by getting young people to look inwards and talk about the pain behind bad behaviour and drug use.

Early last year, Kawerau was in crisis. Kawerau College, now Tarawera High School, needed to call in help during lunchtimes because fights were happening regularly and students were coming to school drunk or high.

Inevitably, these problems began to spill out of the classroom and into the community, culminating in a series of brawls in the main town centre. ‘Bad kids’ taking alcohol and drugs were seen by many as the main cause of the problem. Kawerau resident and Tūwharetoa Ki Kawerau Kaimahi/youth worker Sela Kingi was asked to visit the school to identify ways young people could address the issues they were facing. Sela had 10 years’ experience as a primary school teacher and had even taught some of the students involved in the violence during their childhood.

“I already had my foot in the door,” she says, “and could use that previous relationship to encourage them to talk to me without any prejudging or blaming. When I came to the college to talk to the kids and saw that some were my old students, I was quite sad to see what had happened to them and where they were at.”

Sela approached the students about why there had been fights and discovered a raft of problems lurked below the violence and substance abuse; underlying issues that were being masked by the students’ negative behaviour.

“These weren’t bad kids, but there was so much stuff happening in their lives that was messing them up and they really didn’t know how to cope. They were so brave as they each began sharing these issues such as bullying, self-harm and abuse. With the addition of the drugs and alcohol, all these problems were putting them in a bad place.”

To turn things around, and with the support of Tūwharetoa Ki Kawerau management, the college principal and staff, Sela started the Youth Stylze rōpō. The programme worked by giving rangatahi a topic, such as alcohol or sexuality, and they would tell her how they would teach it. This meant she was able to identify what they thought would be most effective for them in their healing process.

Behind the programme, which she named ‘Looking at Health from the Inside Out – Youth Stylze’, was the idea of a mirror that represented what each of us looks at every day – our own reflection. For these young people, the mirror on the outside reflected a person with bad behaviour, violence and drug or alcohol abuse. However, the inner mirror was smashed into pieces due to the mamae/pain they were enduring and was failing to reflect what was going on inside them. Youth Stylez gave them the chance to show what was going on in their lives and to share the mamae that was causing them to act as they were.

Sela started the programme in the second school term of 2012 and began by bringing in a range of organisations involved in drug, youth mentoring and family services. These were services/support the rangatahi thought young people in Kawerau needed to address some of the pain they knew some of their fellow peers were going through. One such organisation was Child, Youth and Family (CYFs).

“On the day we held the first presentation, Rowie Hohapata from CYFs explained what she did and why. Then some of the students were able to explain how they felt. It was all about communicating about feelings and intentions, and everyone came away much better for it.

For the third school term, Sela asked the students how they would teach the topic of sexuality with their peers.

“Sex education was a problem for many of the students. You couldn’t say the word ‘sex’ without all the girls breaking out into giggles, and yet girls were getting drunk at parties, making bad decisions and becoming pregnant.

“The students came up with a range of ways we could get the information across. We brought in sexuality educator Fiona Jeeves as well as the college health nurse and our own Tūwharetoa Ki Kawerau sexual health clinic nurse to talk about sexually transmitted diseases and different forms of contraception. Drug and alcohol advisors talked about making better decisions. Someone from the gay community talked about accepting ourselves for who we are and about how women’s magazines change photos of celebrities to make them look better. The girls found this extremely helpful for accepting their own bodies and being happy with themselves.

The final term was dedicated to alcohol, and called ‘Me and Alcohol; it’s All About Choices’.

“On the presentation day, we had a band named KOIA come up all the way from the Wairarapa to share a song they’d written for Kawerau on alcohol to support us. Their region had suffered 35 suicides that year, and they coped with the pain through song. Both youth groups worked together to make the final presentation successful and have become fast friends.”

Drug and alcohol consultant Michael Bird spoke to the students about his personal experiences and shared the effects his dependence on alcohol had on his life. Then the students went around the hall in groups to stations that offered different learnings on alcohol. These included Police teaching about breathalysers and legal limits, a mocktail station where students could learn to make nice-tasting drinks without alcohol, sugar diabetes tests, representatives from Bereaved Whānau of Suicide, safe drinking, youth mentors on alternatives to partying, label reading and coercion/peer pressure. These stations were all the students’ ideas. Since starting Youth Stylze, Sela says the community in Kawerau is again heading in the right direction. There have not been as many fights, and the school lunchtime situation has improved dramatically.

“The students have been coming out of the shadows and sharing their stories and concerns with us. We’re now seen as approachable adults who will keep their promises, which is the most important thing in gaining young people’s trust and respect.”

This year, the plan is to bring the programme out to the rest of the community and call it ‘Looking at Health from the Inside Out – Kawerau Stylze’, with support from Riders Against Teenage Suicide (RATS) and the Super Māori Fullas.

“We’ve even managed to get funding for the year after scraping by last year until term four with just a small amount of funding from ALAC,” Sela says.

“It’s exciting to think what we can achieve this year. The Kawerau Stylze Event will holistically cater to the needs of our whānau and, in true Youth Stylze fashion, will have mental health services, education providers, free activities for the whānau, zumba with our local gym and entertainment by our own youth. It’s going to be awesome!”