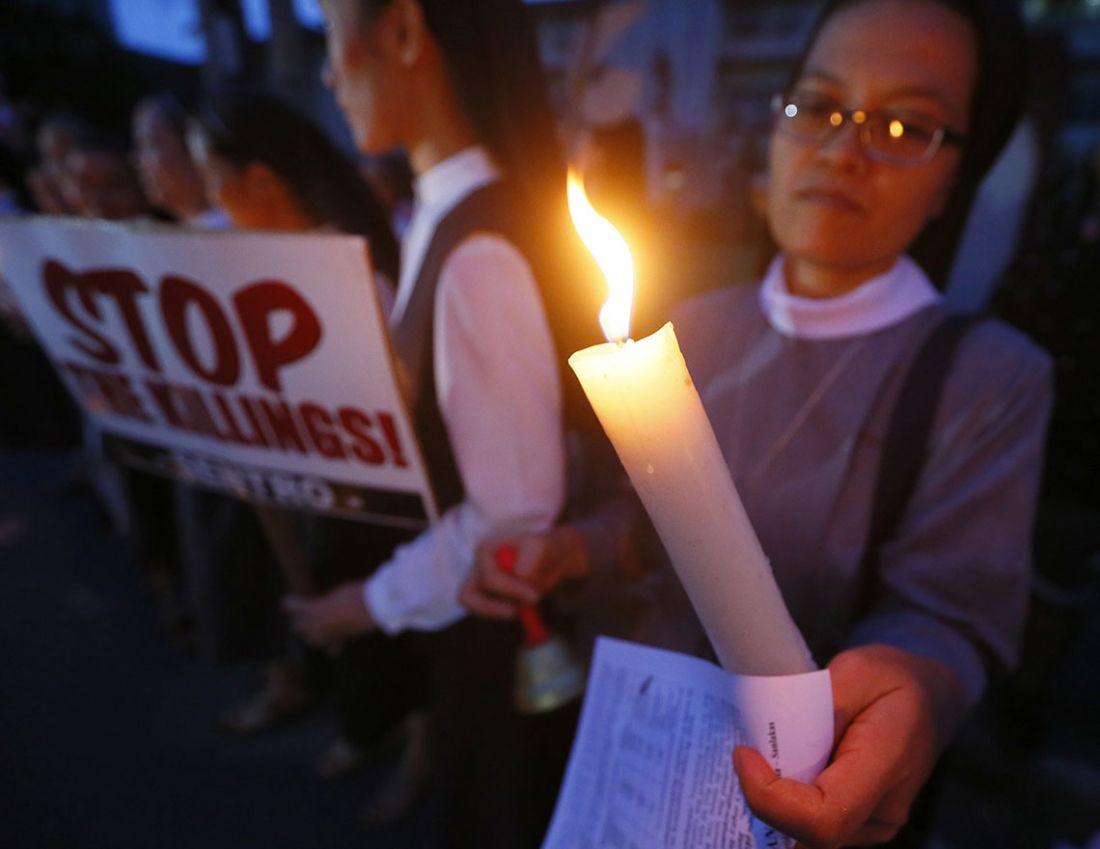 The violence and mayhem being unleashed in a brutal War on Drugs in the Philippines shows no sign of abating. Mark R Thompson outlines what has been happening and the historical backdrop. Story courtesy of The Conversation.

Philippines President Rodrigo Duterte has attracted international condemnation with his violent crackdown on alleged drug takers and his dismissive attitude towards his country’s traditional allies. But his popularity at home remains incredibly high – he seems to have his finger on the nation’s pulse.

Every day during the first 100 days of Duterte’s administration, an average of 36 Filipinos have been killed. About half of these extrajudicial killing are in the country’s capital Manila.

In the Philippines’ so-called War on Drugs, suspects die in “encounters” with Police, are shot by motorcycle-riding vigilante gunmen or are killed by trained and unofficial Police death squads. Their taped up bodies are left with a cardboard confessional sign strapped around their necks, saying “pusher” or “drug lord” or dumped under a bridge or in a neighbouring town.

The guilt of victims is assumed – never proven, seriously investigated or even questioned.

The sad, the bizarre and the misguided

Not surprisingly, there have been reports of many heart-wrenching cases of violent death. A five-year-old girl was killed in late September after gunmen aiming to kill her grandfather opened fire. A father and son caught smoking shabu, the most widely available methamphetamine in the country, were beaten and then shot dead while in Police custody.

Photos taken by Raffy Lerma on 23 July of Jennilyn Olayres embracing her murdered partner, peddycab driver Michael Siaron, on the street became iconic as Filipinos immediately associated then with Michelangelo’s famous Pietà sculpture showing Mary cradling the crucified Jesus. A cardboard sign next to his body carried the chilling message “Pusher ako, wag tularan” (I’m a pusher, don’t do what I did).

President Duterte dismissed this case as “overdramatised”, suggesting one had to be hard hearted to “win” a war against drugs.

There have been bizarre incidents among the bloodshed as well. One case saw a suspected drug taker who “rose from the dead” become inevitably associated with the TV zombie craze. The Philippine media reported that a man found lying in his own pool of blood stood up once he felt safe in the presence of reporters who came to cover the apparent killing.

Crime has been linked to illicit drug use in the Philippines, but the country is certainly not about to degenerate into a “narco state”. No drug gangs are directly challenging the authority of the state, as in Mexico or Colombia before that. Even so, there’s a growing fascination with such states in the country.

Filipinos have become obsessed with the Netflix series Narcos about Colombia’s drug lord Pablo Escobar. Showing death can imitate fiction, one Philippine commentator surmised that Police chief Ronald “Bato” dela Rosa, who is responsible for the anti-drug campaign, was inspired by the television programme to fly to Colombia recently to find out how that South American country had “won” the War on Drugs.

He found the country’s President Juan Manuel Santos has been advocating a more humane solution to the problem.

War on the poor?

Since becoming president in late June, Duterte has implemented his “Davao model” of giving Police and vigilantes a licence to kill drug suspects nationwide.

Duterte used his ‘tough on crime’ approach to win the May 2016 presidential election as a political outsider, promising to restore law and order with strongman rule. Columbia University academic Sheila Coronel has called Duterte the “bastard child of Philippine democracy”.

In a report about the widow of a victim of the anti-drug drive, reporter Jamela Alindogan of Al Jazeera, who has been a leader in the international coverage of the killings, summed up the view of many critics, noting there were fears that “the War on Drugs is a war against the poor”.

Foreign human rights groups and most Western governments have been outspoken in their criticism as have some Philippine activist groups. But protest has been limited in the face of Police terror directed primarily at the poor.

Duterte has played to the deep resentments of those marginally better off after 15 years of solid economic growth. And he’s done so despite the ‘straight path’ anti-corruption platform of the previous administration of President Benigno ‘Noynoy’ Aquino III.

“Dutertismo” as the Philippine sociologist Randy David has termed it, has been driven by middle-class worries about rising crime and a broken justice system as well as crumbling infrastructure and continued corruption.

Academic Nicole Curato has applied the term “penal populism” – appealing to voters who feel threatened by crime and not protected by the Police or the courts – to the Philippines to describe a fantasy “that sets apart the virtuous public from the degenerates who do not deserve due process”.

This ‘politics of anger’ leaves little room for treating drugs as a health problem and as a symptom of social problems rather than its cause. The latter approach would allow for the rule of law and for rehabilitation to deal with the problem, thereby avoiding the criminalisation of the poor.

But the fact that there’s been so little protest against Duterte’s War on Drugs is a sad indicator of the expendability of life at the bottom of the social hierarchy in the Philippines.

Duterte has also mobilised nationalist antipathy against foreign interference, and that of the US in particular, to deflect criticism from his violent drug crackdown.

Indeed, his popularity seems part of the national zeitgeist. Last year, Filipinos flocked to the local film Heneral Luna, which celebrates the life and death of the strong-willed General Juan Luna. Commander of the revolutionary army, he fought against US occupation in 1898 but was betrayed by his compatriots.

When running for the country’s highest elected office, Duterte said a president must be willing to risk his life to defend the people, tapping into the mood created by the film. He pledged his willingness to die in carrying out his promise to eradicate drugs.

Given Duterte’s super-majority in Congress from The Conversation, only a handful of politicians have spoken out against the killings. One who has consistently criticised Duterte’s bloodbath is former Commission on Human Rights chairperson, former Justice Secretary and now Senator, Leila de Lima.

She has paid for her outspokenness. She was removed as head of the Senate committee investigating the killings, and Duterte’s congressional allies retaliated with hearings in the lower house that saw former convicts testify that she had granted them privileged conditions in prison while she was Secretary of Justice in return for drug money contributions to her senatorial campaign.

Duterte claimed de Lima has drug connections through her driver who had become her lover, a double sin in starkly class-divided patriarchal society.

De Lima has received death threats and has been forced to leave her home.

The more than 3,600 people killed in the anti-drug war already exceeds the 3,240 people Amnesty International estimates were “salvaged” (a Filipino term for extrajudicial killings) during the nearly 14 years of dictatorship under Ferdinand Marcos.

There’s a discrepancy between Duterte and his Police chief’s claim that there are more than three million drug addicts in the Philippines. The government’s own Dangerous Drugs Board estimates there are in fact 1.24 million illegal drug takers in the country.

Meanwhile, Duterte’s defence of his anti-drug campaign has become increasingly unhinged. In a recent outburst, he compared his campaign to the Nazi holocaust against the Jews. He later apologised.

The reasons for Duterte’s rise to power and the silence, if not acceptance, from Philippine society about his violent crackdown on drug takers has historical roots.

Not even modest steps towards transitional justice were attempted during the early post-Marcos period, which was marred by repeated military coup attempts, and this established a pattern of informal immunity from prosecution that, with few exceptions, has continued since then.

Democracy has not yet died in the Philippines; the press remains uncensored, and opposition criticism is still tolerated. But civil liberties, particularly the right to life, lie buried beneath the corpses of thousands of victims of Duterte’s 100-day War on Drugs.

Mark R Thompson is Professor of Politics and Head of the Department of Asian and International Studies, City University Hong Kong.

This article was originally published on The Conversation.

Mark R Thompson
Professor of Politics and Head of the Department of Asian and International Studies, City University Hong Kong