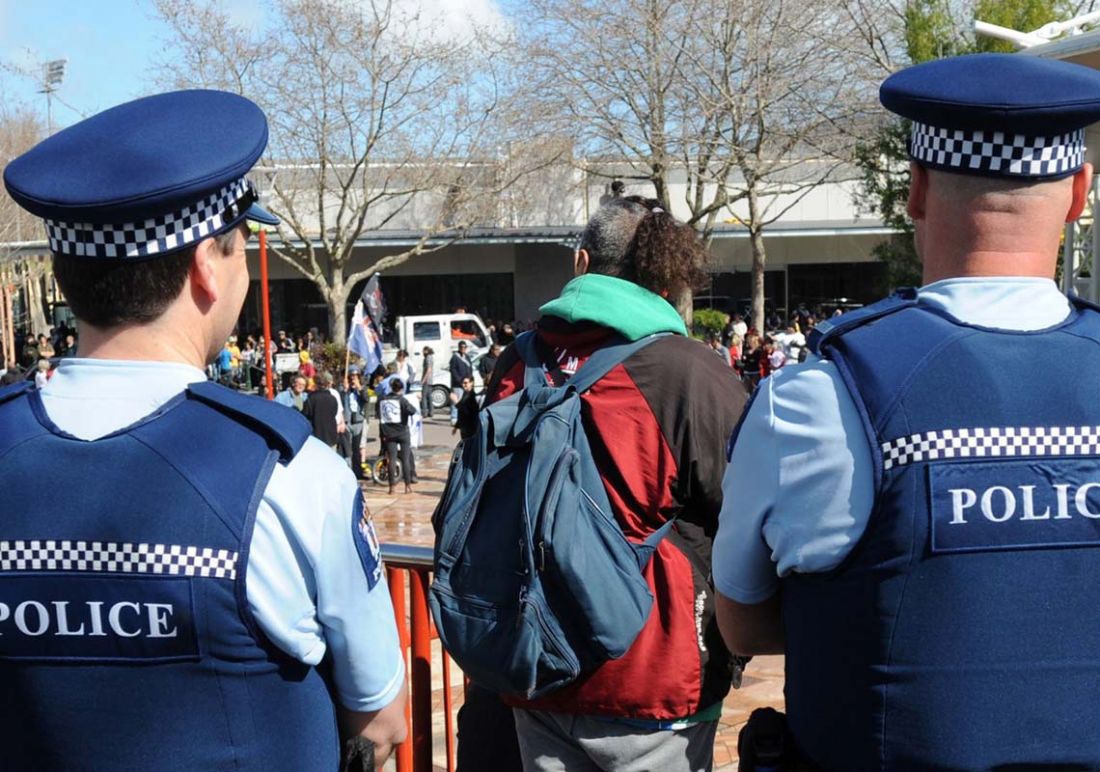 The majority of New Zealanders support change to our cannabis laws, but the political appetite for this is low. Meanwhile, a drop in Police prosecutions for cannabis offences points to a silent relaxation of drug policy. Is this the right way to go, or is it inherently discriminatory and unconstitutional? Is it ok for the New Zealand Police to interpret drug laws as they please, or does this sabotage the sanctity of law in general?

In August, a Drug Foundation poll showed 64 percent of Kiwis thought having a small amount of cannabis for personal use should either be legal (33 percent) or decriminalised (31 percent). That same week, Prime Minister John Key told Radio New Zealand change was not necessary because the Police were not really pushing prosecutions.

“In the case of drugs, I think if we were as Parliament to decriminalise, then one of the messages we’d be sending is that increased drug use is OK,” he told Guyon Espiner on Morning Report.

“And I know that people would say, we, you know, that seems a bit silly given that there’s widespread recreational use, and we know that. But I don’t think the Police really for the most part do prosecute in this case.”

Police prosecutions for cannabis possession are in decline, with offences halving in the last two decades. In 2015, there were 1,105 convictions, which adds up to about 0.25 percent of the estimated 400,000 users. But statistics also show that those who are penalised for using cannabis are predominantly Māori or Pacific Islander, young and have previous convictions.

Last year, Police Commissioner Mike Bush admitted Police have an “unconscious bias” against Māori when it comes to how officers apply their discretion with charging people.

Discrimination aside, legal experts are also raising concerns that allowing Police to interpret the law as it suits is unconstitutional and serves to undermine law making in general. Has the gap between the criminal law and the way it is enforced become so large that the Misuse of Drugs Act 1975 is just a joke? Or is it fine to keep turning a blind eye?

Police are doing a good job

“Does the current law allow Police to reduce the amount of cannabis that’s being used? I would say the answer is yes,” said Police Association President Greg O’Connor.

For O’Connor, this is a measure to show the law’s working as intended.

“If you ask any group of 18-year-olds if they would use more if it was legal, the answer would be ‘no doubt’. In making it illegal you’re reducing the harm to society.”

Prosecutions might be down, but this is because Police are giving more pre-charge warnings, O’Connor said. And seizures of cannabis are rising year on year – from 150,448 plants confiscated from 1,637 different incidents in 2014 to 180,915 seizures from 1,700 incidents in 2015.

The decrease in prosecutions was a response to a government dictum to reduce the number of people going through the criminal justice system as a whole, O’Connor said.

“In the past, if you got arrested with cannabis, you’d go to court, end of story.”

A drop in prosecutions should not be confused with a drop in arrests.

“Police are still arresting people, they’re just not charging them. That’s the difference. The only thing that has changed is now they are giving more pre-charge warnings.”

If you are thinking of smoking a joint, the thought of being arrested is still going to be a deterrent, O’Connor said.

“Don’t look at these figures and think Police have turned a blind eye to people smoking cannabis on a Friday night. They have not.”

What about the statistics that show there is bias in those who are prosecuted? O’Connor says these decisions are not made on the spot but will be weighed up against guidelines after arrest. Some people will not qualify for pre-charge warnings – for example, if they have previous convictions – meaning they will have to be prosecuted. Māori will be more likely to fall into this category.

“These decisions are not being made on the street, they are being made at the station on policy.”

O’Connor points to an Independent Police Conduct Authority report into the use of pre-charge warnings, released last month, which found no evidence to suggest any differential treatment was being given on the basis of ethnicity.

“It’s all being done under policy, it’s being recorded. On the surface of it, [it] may look racist, but when you look into it, it’s not.”

However, while O’Connor is right in that the report says there is no clear evidence to demonstrate differential treatment on the basis of ethnicity was happening, enquiry head Judge Sir David Carruthers also noted that “… the possibility that it could happen is enough to reinforce the need for more guidance on the exercise of Police discretion in this area”.

The Independent Police Conduct Authority also found there were “substantial and undesirable” inconsistencies between Police districts in the extent to which pre-charge warnings were used and the types of offenders to whom they were given.

Auckland University of Technology Professor Max Abbott, who is also Co-director of the National Institute for Public Health and Mental Health Research, has closely studied cannabis use and addiction as part of his work.

He says no matter which way you look at it, Police not enforcing legislation is in effect informal decriminalisation. This has been happening in other countries worldwide, including Britain.

And yes, he argues, it is discriminatory. Abbott’s latest problem gambling research involving more than 6,000 New Zealanders found 13 percent of people had smoked cannabis in the past year. These people included a varied demographic – from young and old to rich and poor, among all races. Yet research shows Māori are arrested at a disproportionally higher rate than non-Māori.

“The fact is, if all these people were arrested, the courts and Police would be flooded, so what they do instead is they are selective in who they prosecute. So you’re much more likely if you’re young, you’re Māori or a Pacific Islander or have any other convictions, whereas our research shows usage is spread across the population,” Abbott said.

If the law doesn’t change, the Police could also change the way they interpret it at any time depending on the government or mood of the moment, Abbott says. In his opinion, the current loose interpretation of the law serves to undermine it.

“What is the position of the Police in this society if they choose not to enforce laws that Parliament has passed? Doesn’t that just lead to a disrespect of laws generally in the wider population? If laws are passed that in effect are not enforced, then what is the point of them?

“The current laws frankly are a waste of time and money, and they don’t achieve what they set out to achieve, which I imagine was to lower cannabis use.”

Police had varied views towards the laws themselves, Abbott said.

“There are those who would like to see them removed or abolished, and there are those who like them because they are quite handy – at present, you can enter someone’s house without a warrant if you think they have cannabis or instruments to smoke it on their property, so that helps them get around the Bill of Rights.”

However, as it stands and if the law isn’t repealed, Abbott does believe it is a good thing that Police are not prosecuting everyone they arrest for cannabis possession.

“I’m a bit torn, because it’s good news that people are not being needlessly arrested and all the costs that go with that for the person and the taxpayer and wider society, with policing and the cost to the criminal justice system. That’s better than them being hell-bent on prosecuting everything.”

It isn’t the role of the Police

In 2010, the Law Commission released a long-awaited report into the Misuse of Drugs Act 1975. The Controlling and Regulating Drugs review led by Sir Geoffrey Palmer found there was “scope for a range of different approaches” to drug laws in New Zealand.

The report found there should be less emphasis on convictions for low-level drug users and recommended a more health-focused law administered by the Ministry of Health.

“Simply punishing a drug user, without taking steps to address their drug use, is a wasted opportunity.”

It made 144 recommendations, advising a focus on high-level drug offences and outlining a formal series of warnings. It said these solutions would be unlikely to increase drug use.

Six years on, Wellington lawyer and former ACT Party list MP Stephen Franks says Parliament has ducked the issue, which has served to “encourage Police to effectively act as if they make the law”.

Franks left Parliament in 2005 and is now Principal at Franks Ogilvie, the Wellington-based specialist public and commercial law firm.

He thinks this government has a worrying trend of avoiding contentious issues, giving Police powers that they shouldn’t be allowed.

“Police administration of liquor law, and their attempts to play politics on opening hours, [is a] recent illustration of decay in that kind of constitutional safeguard from executive abuses of power and ultimately corrupt preferences,” Franks said.

“Constitutionally, it is extraordinary for our kind of democracy to deliberately confer a law [giving] power to Police officers. Our forebears insisted that state officers be subordinate to the law and enforce it impartially, whatever they thought about it. It is a fundamental feature of the rule of law.”

It was fair that society should know the legal consequences of actions in advance.

“That was seen as the major element that distinguished British law and justice from continental despotism, where people in power could make up the rules as they went along.”

In practice, this means Police must serve the law, not the government of the day, Franks said.

“Most lawyers would be anxious that we are abandoning a core element of our protection of liberty, if Parliament ducks deciding.”

The Drug Foundation favours the removal of criminal penalties for drug use, possession and social supply, the development of a strictly regulated cannabis market and greater resourcing for prevention, education, treatment and other health and social interventions for people who use drugs.