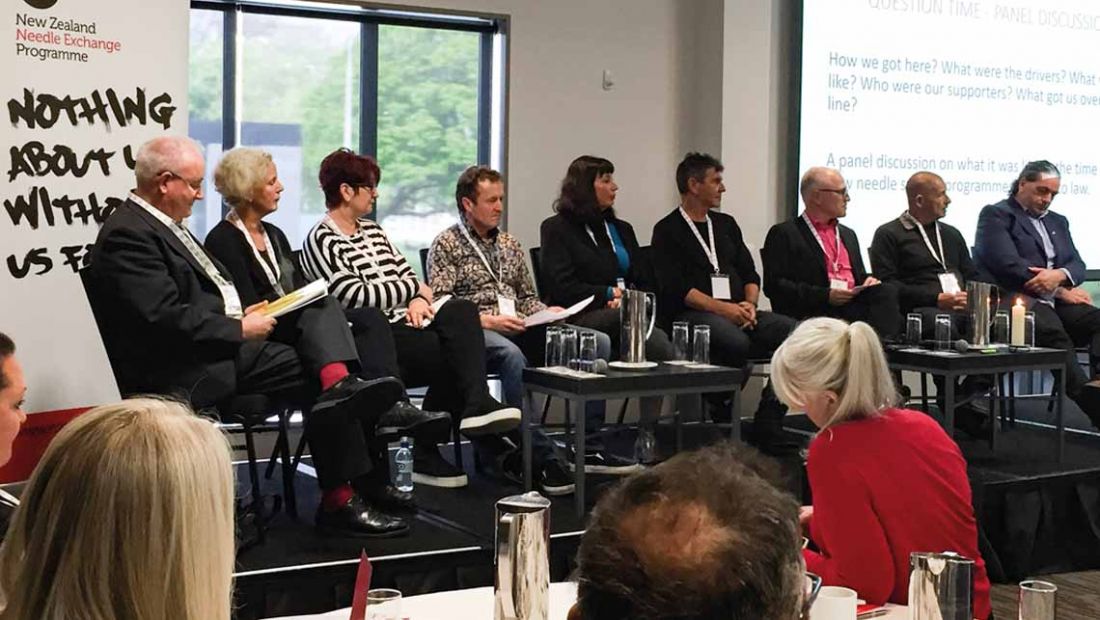 As the programme celebrates its first 30 years, New Zealand Needle Exchange Executive Director Kathryn Leafe takes us back to the Programme early days of needle exchange in New Zealand, detailing its successes over the following years, how far we’ve come, and what’s still left to do.

There are many reasons to be a proud New Zealander including New Zealand’s principled stand at the recent UN meeting in New York and refusal to sign Donald Trump’s declaration for a renewed war on drugs. Another is the often little known fact that we were the first country in the world to introduce a nationwide state-sponsored needle exchange programme.

It was controversial at the time.

“I do not think it is possible to have the perfect solution... when the position is... a balance of awfulness,” said Health Minister Dr Michael Bassett as he introduced the legislation to Parliament early in 1987.

To understand this comment we have to roll back the clock to the mid 1980s and to this “balance of awfulness”. HIV/AIDS had arrived and was rapidly becoming a major concern in New Zealand. They were scary times and those in the gay community, sex workers and injecting drug users began to mobilise to protect their own and others’ health. There was a real sense of urgency.

“Drug users who share used needles and syringes are a group at extreme risk of contracting AIDS,” said Dr Michael Cullen during the bill’s second reading. He was not wrong, needle sharing was common and equipment was hard to come by.

Ben (not his real name) describes the reality of the time:

“We had to look for needles and syringes in rubbish bins; even the dumpsters behind veterinary clinics. That’s pretty dangerous using needles used on animals. It was easier to get the drugs than it was the needles.”

These were extraordinary times and the fear of the potential impact of AIDS was very real. It was also a time of change in New Zealand; homosexuality and sex work had been decriminalised. These groups played a central role and Bill Logan recalls how, “We realised we needed to include and address the needs of needle users, so we started to advocate for needle exchange… it just made sense”. On 17 December 1987 the sale of needles and syringes to people who injected drugs by medical practitioners, pharmacists and other authorised representatives became legal.

Looking back, there can be no doubt that today we owe a huge debt to the activists and pioneers in the drug using community. There are many like Ben who have no doubt that the introduction of needle exchange saved their life.

“I can’t tell you how grateful I am. I wouldn’t be alive now if it wasn’t for the needle exchange programme, there’s no doubt about it.”

But, it wasn’t just the activists who brought this change about. There were also the politicians whose open-mindedness and determination to stem the threat of AIDS made needle exchange provisions possible. The battle was also fought by health professionals, who not only advocated for the scheme, but were prepared to risk professional sanction in supplying equipment prior to it being legal to do so.

This makes the needle exchange programme one of our country’s most successful public health initiatives.

To put this figure into context, international prevalence of HIV among people who inject drugs is 13 percent. This success can largely be attributed to the early introduction of needle exchange.

Just as with Ben, needle exchange has saved countless lives and we owe a debt of gratitude to the men and women who paved the way for the programme as it is today. There are too many to name in this editorial but at our conference in October we acknowledged the many contributions and formed our own roll of honour.

The needle exchange programme has done more than just save lives, it has also transformed lives. Needle exchanges are an essential point of contact with communities who will infrequently access mainstream health and social services, a community in which criminalisation, stigma and discrimination have a massive impact. Needle exchange in Australia and New Zealand led the development of peer-based approaches. This non-judgemental approach, empathy and acceptance of meeting people where they are at, has built a bridge with many and enabled them to develop in ways that may not have seen possible, including the creative arts, politics, business, marketing and health services.

Dr Magdelena Harris, currently an associate professor at London School of Hygiene and Tropical Medicine put it this way:

“I am so proud of New Zealand! It is important that peers continue to lead and be meaningfully involved at all levels of needle exchange for the service to remain responsive to the needs of its community. I can credit my early involvement with Dunedin Intravenous Organisation to the wonderful peers who were running it at the time – they sparked my passion for harm reduction which continues to the present day.”

So what do the next 30 years hold for those who inject drugs and how will we meet those challenges?

This is a very real question and one that needs to be responded to with the same passion, conviction and determination that activists, politicians and health professionals brought to the table in the 1980s. Of course, the challenges we face have changed since then but the core precepts remain.

In the late 1980s the Ottawa Charter, with its commitment to the involvement of key populations and focus on the need to both protect and promote health within marginalised groups, was ground-breaking. Today, these principles are taken for granted and have been extensively developed. We’re now in Ottawa Plus times. Peer involvement is seen as essential in service delivery, and not just needle exchange. Lived experience is now far from something to be hidden by those working in mental health and addiction services.

Today the needle exchange programme is one of the largest employers of peer workers. As current or former injecting drug users there is a credibility and unique sense of trust with the community. Our task now is to develop and enhance this relationship further, building the capacity to respond to new challenges our community faces.

These challenges include changing drug patterns and populations. The injecting scene in the past was largely opioid based. Today, while methadone remains the most injected drug, methamphetamine and steroids are increasingly prevalent. One of our challenges is to make sure the equipment we distribute and the information we provide meets these changing needs.

New Zealand led the way in in establishing a national programme but it wasn’t until 2004 that a free programme was introduced. Prior to then it was user pays. Today 15 percent of distribution remains users pays, and free equipment is still based on an ‘exchange’. So, our challenge is to move forwards and upscale distribution levels; the evidence base is clear on this.

Needle exchange is also about so much more than the provision of new needles and syringes. One of the critical success factors of any exchange is the engagement and relationships built. Through this engagement we can provide linkage to other services, health care and social supports.

Finally, naloxone. In New Zealand we are not experiencing the overdose crisis overseas, but overdose deaths are happening and overdose in entirely preventable. The needle exchange programme is an obvious channel through which to ensure naloxone is widely available in our community.

Despite the Medicines Classification Committee decision in 2016, we are still waiting. To quote our Canadian colleagues, “While you talk, we die”.

Wouldn’t it be fitting if in our 30th anniversary year the political will existed to make naloxone widely and freely available.