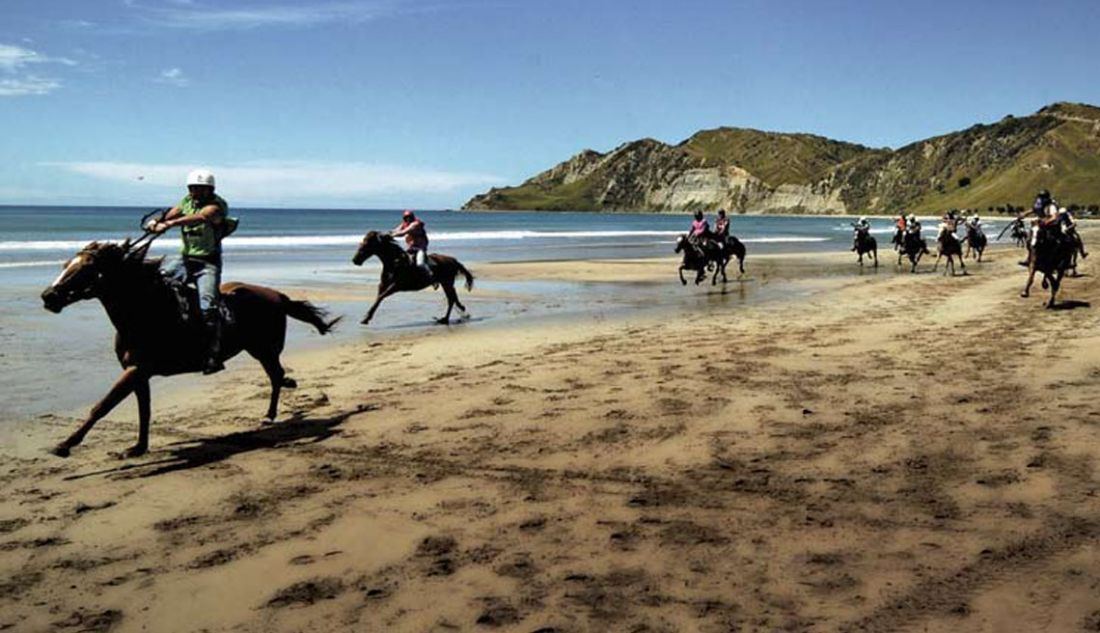 For many in the East Coast region, alcohol and drugs seem the only escape from a life of unemployment and apathy, and it’s a problem affecting young people as well as adults. But a number of Community Action on Youth and Drugs (CAYAD) people and initiatives have begun to make a real difference.

When Kerehama Blackman returned home to Tolaga Bay after eight years in the Navy, he found a deeply troubled town.

Memories of an idyllic East Coast upbringing were replaced with the bleaker reality of a town in the grip of apathy, unemployment and drug and alcohol abuse.

“Tolaga has about 850 people, and we’ve got five liquor outlets and a heap of tinnie houses,’’ Blackman says.

“All along the whole East Coast, there are not a lot of jobs. The feeling is sometimes, ‘Oh, I’m poor and I can’t get a job, I don’t feel good so I’ll get drunk or stoned’. That’s normal in the houses of our youth and is not seen as a problem. People feel sorry for themselves, but they really need to get off their bums and do something about it.’’

Blackman decided to do something about the lack of motivation and activities for youth. About five years ago,he set up a Friday night youth club where teenagers could participate in sport.

“It gave the young people an excuse to get off the streets, gave them a safe environment and also gave them some discipline they weren’t getting at home.

“The kōrero [talk] is positive and so are the messages they are getting. There’s no running people down allowed, and there’s no alcohol and drugs either.’’

Blackman’s Friday sports night quickly caught on with local youth but getting their parents on side proved to be a much bigger task. “A lot of adults were saying all the problems in the town were caused by youth. I said, ‘No, it’s only 5 percent of young people causing the problems. The rest of them are just trying to get along.’’

Blackman says teenagers from the youth group decided to hold a hui (meeting) where adults were invited to come along and discuss their issues.

Not a single adult turned up, which showed Blackman there was a lack of adult leadership in the community.

“Some adults from Tolaga Bay have never been out of the area. They might mean well, but they are not exactly being good role models for their kids.’’

He also realised young people needed more activities to gain positive experiences they might not be getting at home.

About the same time, Blackman was approached by the Ministry of Health-funded Community Action on Youth and Drugs (CAYAD) initiative to start a drug and alcohol programme in the area.

The scheme, established in Tolaga Bay in 2004, was aimed at reducing young people’s alcohol and drug use.

Similar programmes were set up in 2004 in Hicks Bay, which is also in the Gisborne region, and in nearby Ruatōria about two years ago.

Their success in curbing youth alcohol and drug abuse can be measured in a number of ways. Suspensions and expulsions from school – in the past, largely among teenagers on drugs or carrying them – have dropped significantly since the programmes began.

Four years ago, at least 25 students a year were suspended from the local Tolaga Bay high school. That number has now dropped to about two, Blackman says.

Representatives of his youth group now advise the local council on youth issues.

The Tolaga Bay CAYAD programme also runs diving courses in the pristine waters surrounding the township, and young people are trained as surf life savers to patrol their own beaches.

One of the success stories from Blackman’s CAYAD programme is 17-year-old Ari Parata-Walker.

She is on the Tolaga Bay Youth Council and will soon become the first person from the town to travel overseas on an American Field Service (AFS) international exchange programme.

“It would be easy to fall in the trap of drinking or taking drugs in this place,’’ she says.

“There was nothing to do before, but now Kere [Blackman] has given us activities and asked for our opinions. Before I joined, I was just doing nothing.”

Parata-Walker, whose family has lived in Tolaga Bay since before she was born, says the CAYAD programme has given the town back some of its mana (pride).

“It’s stopped some teenagers going off the track, and it’s made the adults realise we are not all troublemakers.’’

In Hicks Bay, the CAYAD coordinator is Moki Raroa, a trained teacher and youth councillor who knows about the rough side of life. As a young man, he associated with patched Black Power members.

Raroa is taking a slightly different tack from Blackman in addressing social problems in his town of fewer than 1,000 people, but he is having just as much success.

Raroa says, before the start of the CAYAD programme, drug abuse among adults and teenagers was rife.

“We can grow 15-foot cannabis plants here no problem. We are acknowledged as the second-best drug growing region in the country behind Northland. Drugs have always been a large part of the place and so have gangs.’’

“There have always been a lot of expulsions and suspensions in the school for kids having drugs or being drugged at school.’’

The situation at the local high school was so bad that, in 1997, an Education Review Office report slammed it as having among the country’s worst exam results and providing substandard education.

In 2004, Raroa was approached by CAYAD to set up a youth programme in Hicks Bay.

He began running youth-orientated activities such as boxing, waka ama and kapa haka to give young people a sense of achievement.

Raroa also focused on working closely with the Māori immersion school, or kura kaupapa, he and local iwi had established at the town’s marae in 2002.

Raroa says the establishment of the school was critical in bringing the largely Māori community together and getting parents involved in their children’s lives.

“People are sometimes a bit scared of traditional schools and feel like they are naughty students again walking through the gates. With the marae, they could come whenever they liked, and it feels like a second home not an institution.’’

The kura kaupapa, which has now moved into its own premises on the site of a disestablished school, does not operate like a traditional school.

Raroa says the school operates around what is happening for pupils at that time, and its hours are flexible. If there is a big sporting competition coming up, students may stay late every night to hone their skills, just as they might with major exams approaching.

Te reo Māori is spoken, and subjects taught are relevant to the local environment.

“We’re right on the coast here so we do lots of water sports like diving and fishing, and the students are taught about our local geography and plant life,’’ Raroa says.

The only compulsory subjects are Māori and mathematics.

Raroa says the school’s focus has been on engendering a sense of identity and pride in students – a tactic that seems to have worked. For the past three years, 100 percent of the kura kaupapa’s pupils have passed NCEA level 1.

“A lot of the kids used to have no respect for anyone, but through achievement, they have found respect for themselves and other people. They have seen the value of their hard work pay off.’’

A condition of taking part in CAYAD sports programmes is passing a drug test, administered by local Police. One of Raroa's main aims in setting up sports programmes was to get parents more involved in their kid's lives.

“It was the fathers we were really targeting. Lots of them are patched gang members or involved in tilling the soil and growing the hooch [cannabis]. We needed them to be better role models for their children, although the kids are often less set in their ways and grow their self-esteem quicker.’’

Raroa says fathers were called on to help run sports programmes such as boxing and diving and to share their skills.

“We have had a lot of success with boxing. A lot of the major dope growers are involved, and they are spending time doing something productive with their kids. They see their kids succeeding and hopefully see there is a bigger, better future for them.’’

Raroa says the CAYAD programme’s main aim – a drop in drug use and convictions – has been a byproduct of the success of the kura kaupapa and sports initiatives.

“We have always known there were drug problems, but the conventional ways like counselling and therapy or the legal ways weren’t having an impact. We realised to make a change took a big conscious decision and involvement of not just the young person but the whole community.’’

Blackman, who runs the Tolaga Bay programme and also oversees CAYAD initiatives in all three areas of the East Coast, says Ruatōria has an extra dimension to its drug problem in that P is starting to be used by young and old.

“We have heard there’s P in school. Kids are selling it in school, mostly because their parents, who are in gangs, are getting them to.’’

“We hear forestry workers are using it, truck drivers are doing it to stay awake on the long hauls and the Black Power is selling it.’’

Blackman says Jimi Hills, who runs the CAYAD programme in Ruatōria (but was unavailable for an interview with Matters of Substance) has put the issue on the town’s radar.

“He’s been getting people together in the town and telling them they have got to talk about P. They need to have a hui. If they don’t get on top of it now, it’s going to get out of control.’’

For his trouble, Hills has been threatened several times by families involved in selling P, Blackman says.

“They say they are going to bottle him and that sort of thing. I have been threatened by people in Tolaga, but the situation seems to be worse in Ruatōria, with lots of different groups and families rather than one iwi.’’

Blackman says the CAYAD programme in Ruatōria is in its formative stages, but Hills is making good progress.

“We have to tread really carefully with things in Ruatōria and think really hard about how to deal with this problem of P. I haven’t heard of it being a real problem in Tolaga or Hicks Bay, but it’s only a matter of time.’’

Like the CAYAD coordinators in Tolaga and Hicks Bays, Hills is working hard to boost young people’s self-esteem though achievement in sports, Blackman says.

Blackman says the reason for the overall success of CAYAD on the East Coast is that young people are helped to succeed and develop greater mana, rather than being lectured about the dangers of drugs and alcohol.

“A lot of these kids don’t like school, so what’s the point of sitting them down and talking at them like they get in class? When the kids are playing basketball or rugby or whatever we do with them, we get the message through to them, in a more subtle way.

“From the sidelines, we teach them to respect themselves, and when they do this, they realise that drugs and alcohol are not going to do them any good.”