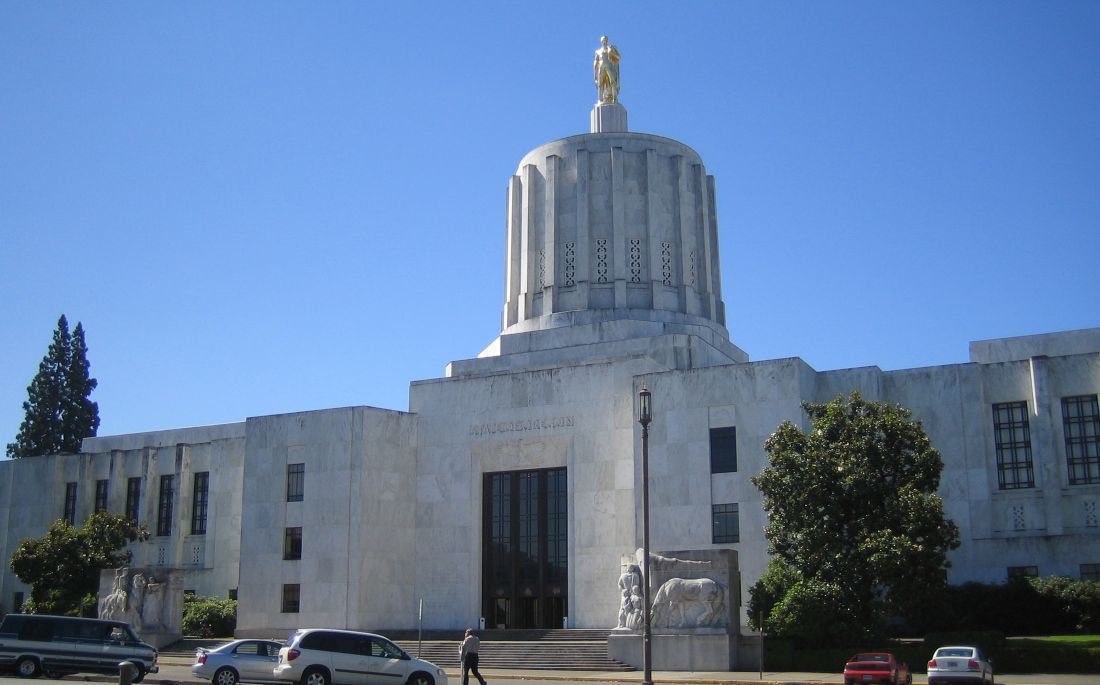 We are seeing a change sweep across the USA, the land that brought us the 'war on drugs'. And a growing momentum for law reform across the globe. Russell Brown filed this update.

Since the first of February this year, anyone in the US state of Oregon caught possessing or using a personal quantity of any controlled drug – including heroin, cocaine or methamphetamine – has been officially not a criminal – or, rather, not liable for criminal prosecution. Instead, they will have the choice of paying a $100 fine or completing a health assessment at an approved addiction recovery centre.

The state government reported late last year that Oregon had suffered a 40% increase in drug overdose deaths in 2020, in line with with national trends during the Covid pandemic. This dramatic shift from a criminal justice approach for drug users to one centred around health (a move the American Public Health Association called for as far back as 2013) came not from the state's elected politicians, but from the voters themselves, who last September approved Measure 110 by a 16-point margin. The measure also stipulated that funding for the introduction of new healthcare resources, including a a 24/7 telephone addiction recovery centre, would come from Oregon's burgeoning tax revenue from its legalised cannabis market.

McVay says that although Oregon has long led the way on drug policy reform – its needle exchange was one of the first in the US – "conventional wisdom has always been that even talking about decriminalising drugs other than marijuana, let alone legalising and regulating them, is too radical. What Oregon has done is prove that bit of conventional wisdom wrong. Oregon has set an example for the rest of the nation, which becomes apparent when you look at the other states that are now considering broad drug decriminalisation. Politicians in those states need to be bold."

It increasingly looks like they are. Three weeks after decriminalisation officially began in Oregon, legislators in Massachusetts introduced a bill to do the same in their state. The name of the bill, An Act [Relative to] Harm Reduction and Racial Justice, was a clear signal of its rationale. Two weeks later, a group of representatives introduced a similar bill to the state of Vermont's assembly. (A separate bill in Vermont aims to wholly decriminalise plant psychedelics such as psilocybin mushrooms and ayahuasca – a move Washington DC voters already mandated by passing Initiative 81 last year.)

Conventional wisdom has always been that even talking about decriminalising drugs other than marijuana, let alone legalising and regulating them, is too radical."

While lawmakers in other states explicitly talk about following Oregon's lead, there will also soon be another country decriminalising drug use at a national level – 20 years after Portugal did it and radically reduced drug-related mortality. Norway's parliament is in the process of passing a bill to decriminalise the use and possession of all drugs. Prohibited drugs will stay prohibited, but police will now confiscate drugs and refer users to counselling if necessary. The move, which has broad political support, will take the country a long way from its harsh, ultra-prohibitionist past in the 1980s, when both left and right championed the dream of a drug-free society. The reality, as the parliament's health sub-committee acknowledged in calling for the change in 2017, has been one of the worst rates of drug mortality in the EU – nearly triple the average for EU states.

Across the Tasman, the Australian Capital Territories legislature has begun consideration of a similar bill, (which, like Norway's, sets low thresholds for possession – in ACT, more than half a gram of MDMA would get you busted the old-fashioned way). In Canada, at the urging of the mayor of Vancouver, the state of British Columbia has formally sought federal permission to introduce decriminalisation as a way to deal with the city's horrifying opioid crisis.

Not all jurisdictions, of course, start from the same place. But even countries with notably harsh drug laws and penalties are beginning to shift away from the most onerous criminalisation. Taiwan's legislative assembly recently reduced the minimum penalty for growing cannabis for personal use from five years to one and gave courts the option of sending an offender to rehab rather than prison.

The minds of legislators were presumably focused last year with the arrest of the son of the Taiwan Parliament's majority leader on cannabis charges, in the same month as local basketball star Jet Chang. An emboldened reform movement holds rallies and there is even a regular podcast hosted by human rights lobbyist and "weed lawyer" Zoe Lee, who is also a list candidate for the Green Party.

But the change in Taiwan is actually down to another driver of drug law reform: constitutional courts. In 2017, Huang Hsien-chang was caught growing six cannabis plants at his home in the southern Taiwanese city of Tainan. He was convicted and received the minimum five years' imprisonment. But rather than simply accepting his punishment as others had, Huang appealed it as too harsh. In March last year, Taiwan's highest court agreed, finding that minimum sentences in the country's Narcotics Hazard Prevention Act were not only excessive, but unconstitutional and gave the executive branch of Taiwan's government a year to amend the law.

Huang still went down for two and half years and it might all seem a long way from somewhere like Mexico, where a bill legalising cannabis and creating a regulated market is on its way into law. But Mexico's reform started the same way Taiwan's did – in a constitutional court. In 2015, the Mexican Supreme Court ruled that the prohibition of personal use of cannabis was unconstitutional. The government responded with a new medicinal cannabis law. No, the court clarified in 2018, we meant all cannabis use.

There are even rumblings of reform in deeply conservative places like the Indonesian province of Aceh. Indonesian law classifies cannabis alongside heroin and methamphetamine and prohibits even medical use of cannabis, but local commentators have been pointing at neighbouring Thailand's unusual system allowing households to grow up to six plants each for sale to medicinal cannabis processors. Although only CBD preparations can be sold to the public, local media is full of speculation about Thailand's potential for medicinal cannabis tourism.

Ann Fordham, the executive director of the International Drug Policy Consortium, says she sees a positive and accelerating trend towards positive drug policy reforms around the world. “This momentum does reflect an increasing acknowledgement of the failure of repressive drug policy measures to reduce the illegal market, as well as the insidious and damaging impact of these policies on so many – especially those facing structural oppression, particularly people of colour, Indigenous peoples and other marginalised communities."

But if change is happening all over, it's inescapable that what happens in the US – so long the enforcer of the UN drug conventions and the world's drug policeman – will be influential.

Sanho Tree, director of the Drug Policy Project at the Institute for Policy Studies, observes that once Mexico's legalisation is enacted the US will be "sandwiched between two legal marijuana countries. When you have two out of three Nafta partners who have legalised, that's going to be interesting for the United States. For our banking laws, criminal justice, trade."

The Democratic-controlled House of Representatives has already passed the MORE Act, which would decrimalise cannabis at the federal level, leaving decisions about legalisation up to each state. But Tree is dubious about the chances of the matching Senate bill passing in full – in part because the social equity principles enshrined in the proposed laws are not favoured by a new and increasingly politically influential generation of "Big Marijuana" lobbyists. .

Ann Fordham, however, believes the prospective laws are critical, given their strong focus on racial and social justice, on reparations for the harms of the ‘war on drugs’, the expungement of criminal records and the efforts to ensure that the emerging legal cannabis market is not dominated by big business at the expense of smaller operators.

Much will rest on leadership from the Biden White House – where the signals have been somewhat contradictory. A recent letter to stakeholders from the new acting director of the Office of National Drug Control Policy Regina LaBelle cited "Enhancing evidence-based harm reduction efforts" as a policy priority, along with "Confronting racial equity issues related to drug policy" and expanding access to evidence-based treatments for opioid use disorder. That last one might sound modest, but a move away from political affection for abstinence-only solutions would be extremely significant.

This momentum does reflect an increasing acknowledgement of the failure of repressive drug policy measures to reduce the illegal market."

But the change of philosophy has been whispered rather than shouted from the ramparts, and it's not yet clear yet what it will mean on the ground. Some advocates believe Joe Biden's widely-tipped pick for permanent ONDCP director, Dr Rahul Gupta, betrayed his professed support for harm reduction by helping close an important needle exchange in his home state of West Virginia out of political expediency.

Whatever the White House does, it's clear that reform will continue at state, county and municipal level in the US – a phenomenon that may be hard to replicate in other countries. Another factor in American drug law reform is also not a factor elsewhere: the campaign money behind it. The "Yes" campaigns in Oregon spent more than $6 million, much of it in gathering the signatures to get 110 on the state ballot, and $4.5 million of that came from Drug Policy Action, the political arm of the national law reform group the Drug Policy Alliance. A further $500,000 was donated by Chan Zuckerberg Initative, the "philanthrocapitalist" organisation founded by Facebook CEO Mark Zuckerberg and his wife. By contrast, "No" campaigners received a total $167,740 in contributions. The disparity was even starker for Measure 109 – "Yes" campaigners had more than $5 million to spend and opponents received no donations at all.

For Doug McVay, the lesson from Oregon and the individual cities pursuing an end to the drug war is that "Grassroots politics is the only way to build support for real, lasting reform. Reform can win. People can change the world if they're bold enough to try."

And assuming the new environment being built in Oregon works and maintains strong public support, is there a next step?

"Drug policy reform is a part of the broader movement for social justice. There are always next steps."