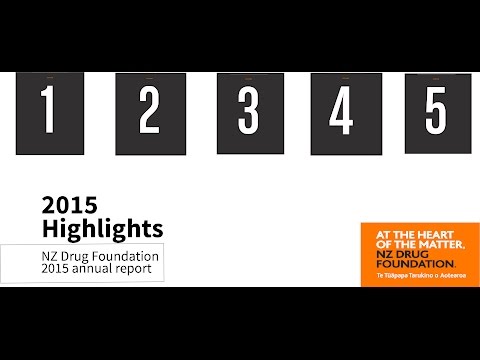 It is with much sadness that I begin this year’s AGM acknowledging the passing of Professor Sir John Scott. John was the founding chair of the Drug Foundation. He was a scientist, a medical doctor passionate in his drive to see policy shaped by good evidence rather than political fashion. In 1989 – the year Sir John established the Drug Foundation along with other medical colleagues – drug policy was characterized by the rhetoric of getting tough on drugs, of the phrase “Just Say No”. He helped shape an organization that has endured and stayed true to staunch and fearless advocacy for evidence-based and people-centred responses to complex alcohol and other drug issues.

2015 has been a good year for the drug Foundation. Ross and the staff will present some of the highlights of this year, but let me first give a quick overview of the work that the Board has been especially impressed with:

The first is setting up the new office. These really are one of the nicest NGO offices in town – the design company even entered us in a fitout and branding award. But in all seriousness, we are really pleased with the new space which has enabled the team to achieve one of the Drug Foundation’s key roles – brining people with divergent views together to debate and ponder hot drug policy issues and to find a way through much of the complexity that confronts us.

Next up, I want to mention Drug Foundation’s work in the drug driving space. Many of you won’t have been aware of the award winning work the team has done through its drug driving campaign “Steer Clear” – and you shouldn’t be aware…you’re not the target audience. This campaign really played to our strengths: communicating with attitude, working directly with the people most affected by an issue, and commitment to innovate and testing new ideas. This work sits alongside some policy heavy lifting: about this time last eyar we hosted a symposium with leading world experts on drugs and driving. This is where I get to mention this was something we co-hosted US White House Office of National Drug Control Policy. Pretty cool aye?

Something else cool we did this last year was lead New Zealand’s part of the Support. Don’t Punish global day of action on drug policy reform. NZ cities joined over 150 other cities around the world bringing attention to failed punitive responses to drug problems and the need to shift those efforts towards protecting human rights and promoting wellbeing. And at the same time, New Zealand put special focus on acknowledging the work of those people at the frontline working to reduce drug harm – those people in needle exchanges, treatment agencies and more. We really appreciate so many people joining in this day.

This is the second year of our partnership with Odyssey Auckland. The joint project is focused on improving linkages between youth alcohol and drug treatment services and the education sector so that better responses can be given to young New Zealanders dealing with drug issues…and life in general.

Casting back there is there one other piece of work I wan to mention that we’re particularly proud of: the long overdue release of the Government’s National Drug Policy. This was launched just four months ago by Asscoiate Health Minister Peter Dunne, but had been at least two years in the making. I want to give special acknowledgement to those people in the Ministry of Health who were very open to allowing the Drug Foundation to provide input and advice into the development of the new policy.

Much of the advice we provided was drawn from the Wellington Declaration – a document that represented many diverse voices from the community affected by drugs and drug policy, a statement that was developed in a powerful process of consensus building led by the foundation. We were especially impressed that the government’s National Drug Policy adopted as its purpose the same purpose expressed in the Wellington Declaration.

We’ve also been impressed with how Minister Dunne has expanded on the pricniaples of the Wellington Declaration with his own touch. Something he first expressed at a United Nations meeting earlier this year, which has now made its way as key principles of the National Drug Polocy via his language of “Innovation Proportion, and Compassion.” There is a lot wrapped up in those words. Essentially he argues we need innovative responses to address the chanllenges of new substances made available through the black market; we need proportion in the way we implement our drug control responses – he says in fact the heavy handed approach doesn’t work; and he says we need to show compassion to those who need help. We agree.

But let’s not be content with fine words. The challenge before us all now in turning that National Drug Policy into clear actions which are all of those things: proportionate, innovative and compassionate. We’re keen to continue to wrok with the government on figuring out exactly how the fine words translate into practical acgions.

Something we still have to grapple with is whether our 40-year-old drug law – a law built on a tough criminal justice approach towards people who use drugs – fits with those principles. Can I be frank: the Misuse of Drugs Act is none of those things. There is no compassion in criminalizing people who use drugs; there is no innovation in an obsolete law born from Nixon’s war on drugs; and there’s no proportion when someone like Kelly Van Gaalen gets jailed for cannabis possession, or many, many Maori who face drug convictions at significantly greater rates than others.

Reform of this drug law remains a top priority for the Drug Foundation. We share the same view as the Law Commission: it’s time that the Misuse of Drugs Act is repealed and replaced with a new legislative response focused on health and wellbeing. A modern drug law that gives real effect to Minister Dunne’s guiding principles.

The Drug Foundation is not a lone voice in making this call. In fact, globally the debate around drug policy and drug law reform is shifting significantly, and will continue to do so as we head towards the United Nation’s drug summit in April 2015.

The Drug Foundation could never be describved as a one trick pony. Modernising our drug law will remain a priority, but we’ve got a whole lot more planned for 2016. I can will give you a brief “heads up” about this now.

There is much urgency pushing for a major rethink of what interventions we provide for new and novel psychoactive substances. With New Zealand’s truly innovative Psychoactive Substances Act currently taking a break, developing effective measures to respond to the smorgasbord of new drugs on the market, being traded freely through Dark Net websites. Part of our response will be a significant update to our drug information services, including a much stronger harm reduction focus of our website.

We started in earnest promoting improved to overdose prevention early in 20125. We argue that lives can be saved through community provision of the OD reversal drug Naloxone. We actually thought this would be a no brainer and simply slot into the new National Drug Policy. I must confess, we were gobsmacked at the barriers that have been put up against the wider provision of an antidote like naloxone. Look out – we’ll be very vocal and impatient on this issue in 2016.

Finally, another strategic priority for will continue to be in the education space – we have a simple vision that all young New Zealanders will stay engaged in education, acknowledging the important protective factors that school and education can have in a young person’s life. We will be pushing much harder in the education sector and also with our health sector colleagues to get better interventions to young New Zealanders facing those fairly common challenges associated with alcohol and other drugs.

There is much more I could say but I will leave things here. We’re about to share a digital year in review so you’ll get a chance to learn some more about what we achieved in 2015. I would like to acknowledge the dedication, creativity and acumen that Ross his team bring to this work.

As you can see, the Board and staff at the Drug Foundation have a strong determination to realise our vision of an Aotearoa New Zealand free from drug harm. We’ll definitely be keeping full-on in our efforts to bring about much needed change.

Over to you Ross.