Opinion: It’s going to take more than a referendum to sort out NZ’s drugs issues

The early signs are the coalition government is not afraid of making tough calls when it comes to healthier approaches to drug use. The Drug Foundation's Communications Manager Stephen Blyth lays out the challenges ahead, and reminds us it’s about more than running a referendum on cannabis.

Late last Friday afternoon housing minister Phil Twyford reversed a Housing New Zealand policy that has spiralled massively out of control. He talked of a new health-focused approach to drug use in housing which will bring to an end what has been a distressing saga. New Zealanders most in need of a roof over their head should no longer fear losing their homes.

Phil Twyford told the public that under a new Housing New Zealand policy tenants will no longer be evicted if traces of methamphetamine are detected in their homes. Instead, support will be on offer. Under the heartless policy of old hundreds of houses lay vacant awaiting clean up, numerous families were evicted, and $75 million was spent on testing and remediation. Private landlords evicted many more, with costs sought at the Tenancy Tribunal. As Twyford put it, the testing furore grew into a moral panic.

Labour MPs have long talked of being committed to treating drug use primarily as a health issue, not a criminal one. This point was repeated on the campaign trail by both prime minister Jacinda Ardern and health minister David Clark. Just six weeks into the new government’s term and we have seen rapid progress. The drug policy shifts underway signal that the new government will break drug use out of a narrow policy silo and make sure it’s intertwined with housing, work, economic development and education.

This is desperately needed as we have seen New Zealand’s outdated approach to drugs let us down time and time again. During the lead up to the election we saw this play out with fatal consequences. More than 20 deaths around the North Island have been attributed to synthetic cannabinoids, along with numerous ambulance call outs and hospitalisations.

The last government resorted to a blame game and chided people for a lack of personal responsibility. We are looking to the new government to show some real leadership here. High on the list is directing the Ministry of Health urgently to put in place a multi-agency early warning system to monitor emerging drug trends. Carefully regulating lower harm substances is another part to the jigsaw, as is ensuring that harm reduction information on emerging dangerous substances reaches the most vulnerable.

And of course, unless attention is paid to the root causes of drug problems then how we respond will keep missing the mark. In the Drug Foundation’s advice to MPs, captured in our new policy briefing, we outline priority actions that extend across many areas of government activity. Here’s where we see the priorities falling:

Priority 1. Keep young people in school and keep them safe.

Priority 2. Reform our laws to treat drug use as a health issue.

In addition to putting compassion and a health response first within public housing, we’ve set out a number of concrete recommendations addressing other priorities. It is very welcome news that funding for mental health, including for addictions treatment, will be increased. This is something the Green Party negotiated as part of its coalition deal with Labour.

The ‘first 100 days’ list of the new government’s priorities also includes a commitment to improve access to medical cannabis for anyone suffering from chronic pain, or who is terminally ill. Groundwork is already in place for this, with the bill lodged by Green MP Julie Anne Genter’s and now being spearheaded by fellow Green MP Chlöe Swarbrick ready for consideration by parliament.

And of course with the government promising a referendum on the legal status of cannabis within the next three years, the public has a lot to talk over. It’s an issue whose time has come, and one which most New Zealanders are mature enough to have a level-headed discussion about. Polling we conducted in July 2017 shows that almost two thirds of the public back either decriminalisation or legalisation of cannabis.

The Drug Foundation wants the date of the referendum to be set as soon as possible to ensure adequate time for a properly informed debate. This process needs to be done well, with an evidence-based information campaign to make sure the public understands the issues. There is a danger the interests of a nascent industry will swamp the discussion.

There is a lot to do and we’d be setting ourselves up for disappointment if we expected government to do this work alone. Adopting an evidence-based approach, there is every reason our recommendations can be accepted by everyone in Parliament. In July this year MPs from four of the parties still represented in Parliament all said some form of drug law change is necessary. While there may be reservations about responsible, strict regulation of cannabis, there is a lot else for MPs to join forces on.

Every step we take to care for rather than punish people who use drugs is a welcome one. The early days of the 52nd Parliament are showing promising signs the right balance will be found, and that anyone who needs a publicly provided roof over their head can keep it while accessing health-focused support when it is needed most.

(This opinion piece was first published by The Spinoff.)

Briefing to the Incoming Parliament 2017 - get a copy

Media release: New approach to dealing with drug use by HNZ tenants a welcome move 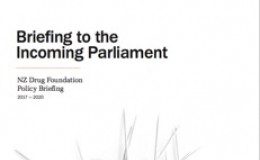