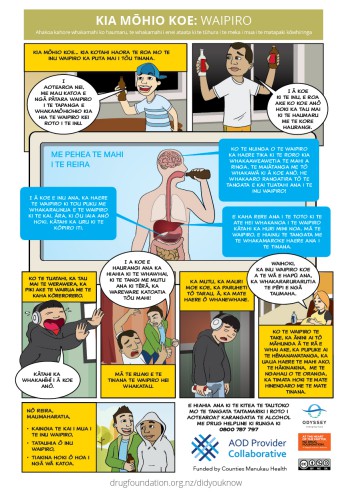 The popular Did You Know series of videos, posters and tools containing the key facts every young person needs to know about alcohol and drugs has expanded with the release of a new methamphetamine video and poster. Additionally, some existing materials are now offered in Te Reo Māori and Chinese. See the updated Did You Know resources

The new methamphetamine video is the fourth in the series. It was developed following demand from educators and people working with young people.

The animated video follows the format of the existing ones, with an honest outline of the effects of methamphetamine, rates of usage, and advice on how to avoid harm if someone chooses to use. The resources have been subject to extensive peer review and testing with a range of young people to ensure they are both accurate and relevant.

A new poster on methamphetamine has been produced.

All four of the animated videos have been translated into Te Reo Māori, as have the four substance posters.

In order to reach Chinese families, the posters are available in Chinese (traditional)

Posters are available as electronic versions for downloading and self-printing or sharing, and in hardcopy.

The expansion of the resources will continue with the production of an animation and poster on synthetic psychoactive drugs.

The "Did You Know?" series was commissioned and directed by the AOD Provider Collaborative (supported by Odyssey) and by the New Zealand Drug Foundation. It was created by Mohawk Media using characters created by Mōca. All contents can be shared under a Creative Commons licence 3.0 (by-nc-sa).