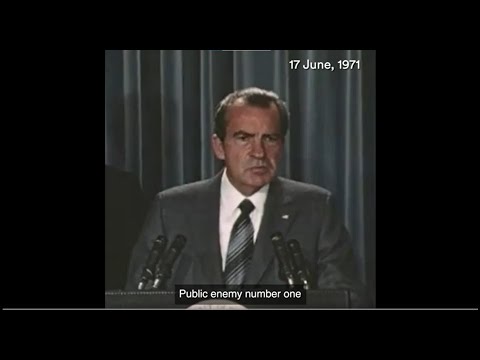 Why are we still waging war for the US?

On this day in 1971, Richard Nixon publicly announced his intention to wage an all-out war on drugs, which he labelled "public enemy number one". Share this video

We know we can do better - in some ways we already are. New Zealand has pioneered its own homegrown solutions like needle exchanges, recently-legalised drug checking and recommendations in the 2011 Law Commission review of MODA.

Now, the Drug Foundation is calling for a new health-based law to be passed – following the repeal of MODA – and for more resources devoted to education, prevention, harm reduction and treatment.

Not enough people know the connection between Nixon’s infamous proclamation and the thousands of convictions for low-level drugs offences here in Aotearoa New Zealand. We need to change that.

The generous donations of a small number of our supporters, who heeded our call a few weeks ago, allowed us to produce this video to mark the occasion. A massive thank you to everyone who contributed.

We are asking for help to fund this work – we need independent funds that we can spend making the case for law reform and decriminalisation. Please DONATE NOW.

But mostly, we need make sure as many people see this video as possible - so please share it widely on Facebook, twitter or YouTube. Let's get people talking about why New Zealand needs to change its drug law.

We can’t afford to wait another year, let alone another decade, before we turn our back on Nixon’s ill-conceived war. Join us in putting in place compassionate approaches to drugs in Aotearoa New Zealand.