It is very clear a joined up community response was needed. To support this work, the Drug Foundation established a community of practice in mid-2018. The purpose of bringing these organisations together was to gather insights from people using synthetic cannabinoids and work together to identify community responses to harm. Below is the range of actions that were developed by the community of practice to respond to the synthetic cannabinoid crisis.

As of late 2019, deaths from synthetic cannabinoids appear to have slowed. However, the ongoing harms and potential for another crisis is still a large cause for concern.

Insights gathering and recommendations to deal with the crisis

The NZ Drug Foundation was contracted by the Ministry of Health to gather insights about the synthetics crisis in mid-2018. We worked with a range of health and social service organisations across New Zealand, and Police, to collect this data.

Two thirds of respondents used synthetic cannabinoids frequently, and most consumed very large quantities.  And polydrug use was common.

People mainly use synthetic cannabinoids because they are accessible, cheap and they can get ‘out of it.’  Very negative effects were common – almost half of the respondents had been hospitalised and/or experienced seizures, and others experienced vomiting, psychosis, suicidal thoughts and blacking out.

People experiencing the most harm were also some of the most vulnerable in our society, such as people who were homeless or unemployed. This highlighted that alongside short-term interventions, we need longer term solutions.

Building on these insights, we then worked with partner organisations to develop recommendations for comprehensive community responses when faced with future acute drug harm.

Download the full NZ Drug Foundation report submitted to the Ministry of Health.

Responding in an emergency

Community groups dealing with synthetic cannabinoids identified they needed immediate advice on what to do in an emergency. This brief how-to guide draws on expert advice from New Zealand ambulance services and acute drug harm specialists who responded to many of the incidents of acute harm from synthetic cannabinoids.

If someone becomes unconscious:

Always call an ambulance if someone:

Talking to someone using synthetic cannabinoids

Frontline practitioners wanted practical harm reduction information to give people thinking about or who were already using synthetic cannabinoids. This step-by-step guide was developed to help practitioners plan this conversation. 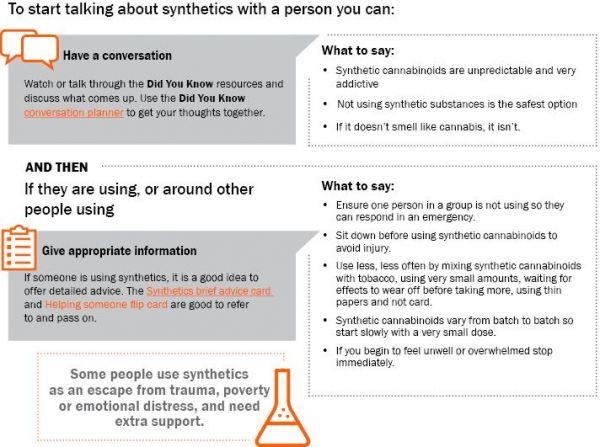 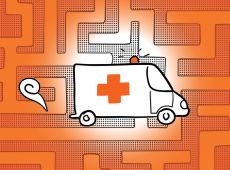 Straight up guide for people who are using drugs

Are you drinking too much alcohol?

A safe space to talk openly and honestly about your relationship with alcohol.