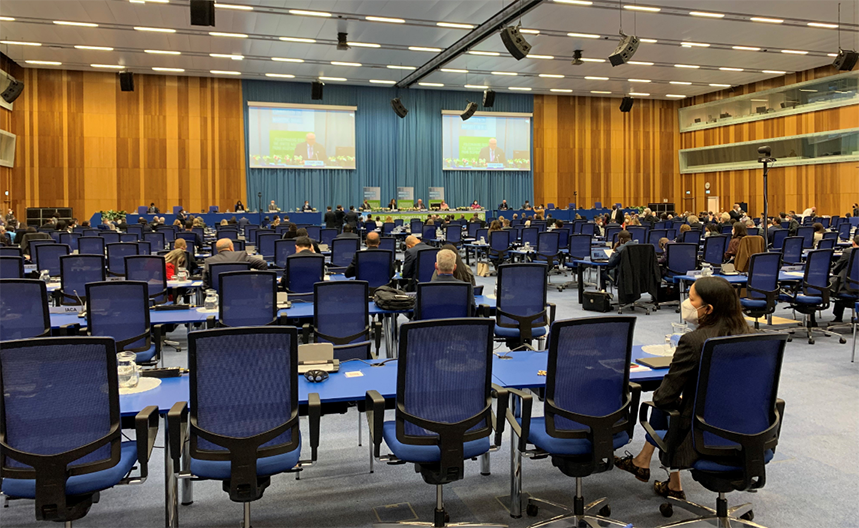 As a student still trying to carve out a career in drug policy, it was a great privilege to be able to attend the 65th United Nations Commission on Narcotic Drugs (UNCND). With a hybrid online/IRL format being employed due to continued Covid restrictions, I spent five nights in front of my laptop at the comfort of my desk with copious amounts of caffeine.

It is not often that one gets the opportunity to participate as the nations of the world come together and work at making the world a better place. The conference brings together representatives from the United Nations to discuss drug policy. As I had no prior involvement with the United Nations, I was quite excited. I was in for a treat from a learning perspective – an entire weeks’ worth of content focused on a topic that I find deeply interesting and fulfilling to explore. However, this would be presented through a lens with which I had no experience using: one of international bureaucracy and diplomacy.

After the formal opening by the Chair, the first day was filled with statements from across the world. In the face of the ongoing Russian invasion of Ukraine, numerous countries directly condemned the actions of Russia, noting that Russia's actions were in clear violation of international law and the UN Charter. Russia expressed frustration at the attempt to “politicise” the work at the UNCND, which came across as ridiculous given the participants and context of the event. Health Minister Andrew Little condemned Russia in a video address delivered on Monday. Little also reaffirmed his commitment to New Zealand's growing health-based approach to drugs, delved into our world-leading legislation on drug checking, and acknowledged the need to better serve our Māori population, which currently bears the brunt of drug harm.

After putting my body clock out of whack to view politics in action, the side events made it all worth it. With over 130 diverse events to choose from, it was hard to pick a favourite. The update on the drug situation in the Nordic countries was very interesting, and hearing about the progress made in these countries, including heroin-assisted treatment schemes and attitudes towards decriminalization, kept me optimistic about the world drug situation. It was enlightening and inspiring to hear about the endless advocacy work being carried out by passionate individuals from these countries. I was also impressed with the presentation on the development of the Global Drug Policy Index, a tool which allows for the evaluation and comparison of drug policies across the world. I was happy to note that Aotearoa scores second overall on this measure, although we have significant room for improvement. 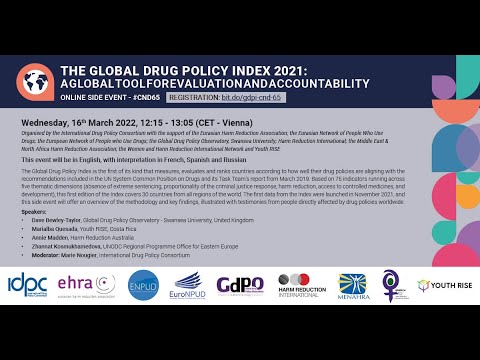 Side event: The Global Drug Policy Index 2021: A global tool for evaluation and accountability

Another highlight of the week was the statement from the UN Working Group on Arbitrary Detention, calling for the closure of compulsory drug treatment and detention centres. Various non-governmental organizations also made fantastic statements throughout, highlighting critical issues including gendered and youth perspectives, Indigenous rights, the environment, and health equity.

Russia put forward a draft resolution to the UNCND, which aimed to increase international cooperation to combat communications technologies for drug related crime. But the European Union reiterated its position on the invasion of Ukraine and noted that they could not trust that Russia would act in good faith. They requested a withdrawal of the resolution, which was further supported by seven Western member states, including Aotearoa.

In the context of the UNCND, this is not only important because of the appalling human rights violations occurring in Ukraine, but because Russia has been one of the voices upholding the ‘war on drugs' approach. In this international context, some hope this may mean another small step towards international drug law reform.

By the end of the week, the main sessions had confirmed for me that progressing drug policy on a global scale is an arduous endeavour. It was frustrating to feel like no real work had been done, especially in the face of those who continue to wave the flag of prohibition. Four resolutions were adopted, and the Russian proposal was deferred until the next meeting. Russia went down kicking and screaming in the final plenary session, complaining about supposed Latvian rule breaking, followed by comments that the Western states’ refusal to cooperate will provide a breeding ground for narcotic offences.

There was complete consensus when it came to the scheduling of two opioids, three fentanyl precursors, and eutylone – a synthetic cathinone which has been found in New Zealand over the past few years. All were placed under international control. The final report that came out of the UNCND read much the same as previous editions, and statements pertaining to the Russian invasion of Ukraine were not mentioned. This did not help to quell the feeling that the consistent mention of Russia was more about public scolding, rather than defending those who were suffering in a meaningful way.

Attending the Commission reminded me that many countries have yet to accept the 'War on Drugs’ as a failure, with nations still handing out severe punishments for drug crimes, including the death penalty. Various countries continue to ignore the value of harm reduction, and shutdown suggestions that they may be infringing upon human rights in their fight against drugs.

With the Single Convention on Narcotic Drugs 1961 used as the blueprint for many countries’ national drug policies, including our own Misuse of Drugs Act 1975, it strikes me that it's time to rewrite these Conventions and our own Act.

Despite this, the side events I attended clearly demonstrated the value of approaches grounded in harm reduction and human rights. It also seemed clear to me that the real work in this area will continue to be driven by the non-governmental organizations behind the scenes. Although I came away from the event with mixed feelings and reduced confidence in the international effort, it was hearing their statements that keeps me hopeful for positive international policy change. I just wish that change would happen a whole lot faster.