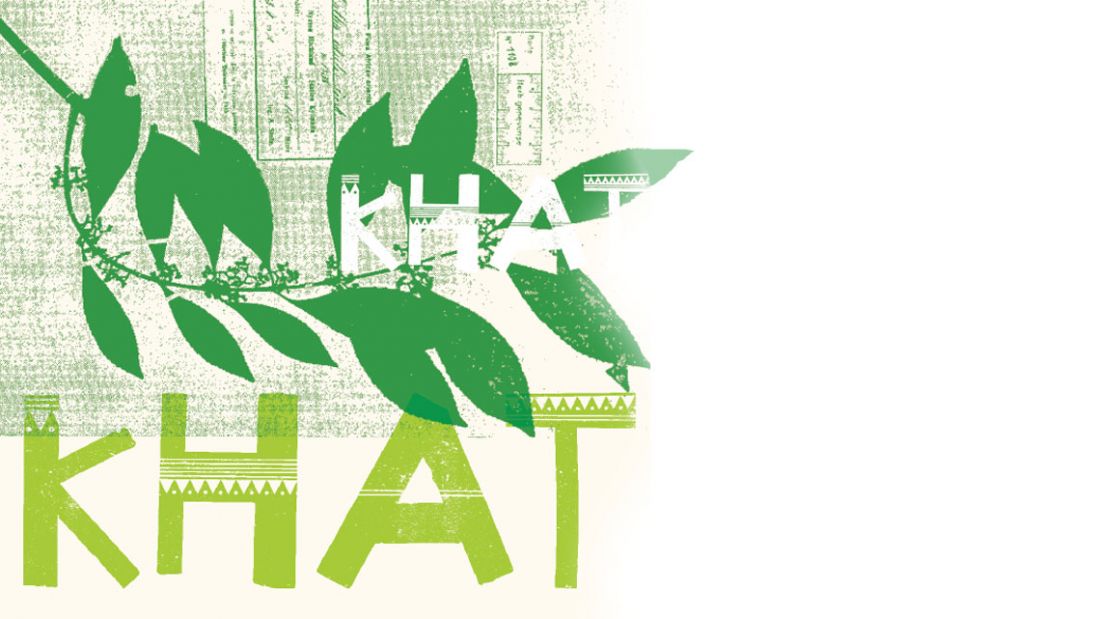 Across the Horn of Africa, there is a scraggly plant that grows in the dry hillsides and sandy rocky soils. Its small green leaves and average height don’t exactly leave a lasting impression on one’s mind, but chewing said leaves might.

Considered a divine food by the ancient Egyptians, consuming khat leaves has been a cornerstone of socialising and cultural practice across northeastern Africa and the Arabian Peninsula for thousands of years. The earliest surviving written reference to the plant is from the 11th century and notes its medicinal qualities, saying it “relieves biliousness, and is a refrigerant for the stomach and the liver”.

Of course, humans aren’t cows: we don’t just stand around chewing vegetable matter for fun. The reason we like to wad khat up and munch on it is that the leaves contain the chemical cathinone. Chewing fresh leaves, or drinking khat tea, releases the cathinone, it’s absorbed through mucus membranes and boom, dopamine goes rushing into your brain in a fashion similar to amphetamine, but with results more akin to a strong cup of coffee.

Fresh leaves are preferred by consumers, as within picking, the cathinone starts to degrade into cathine which doesn’t quite give the same buzz.

With the world’s major plantations literally on the other side of the world and freshness an issue, it comes as no surprise that New Zealanders, being a practical people, have tried their hand at growing khat

“I knew some guys in Christchurch in the mid-80s who refined khat, which was growing somewhere in the city, down to a white powder,” a source told Matters of Substance.

“It hurt like blazes going up the nostril, but it worked.”

While cultivation of the plant doesn’t seem like a widespread kiwi pastime, a significant amount of khat is intercepted coming into New Zealand. In a recent TV3 News story, Customs said that in the past 2 years, over 110 kilograms had been seized.

In New Zealand, the plant is illegal under the Misuse of Drugs Act 1975 and is scheduled as a Class C drug in the same category as cannabis or coca leaves. Ever eager New Zealand regulators banned the plant in 1981 after the World Health Organization classified it as a drug of abuse, even though there was little evidence of its use in New Zealand.

Many European countries have also banned khat, including Germany, France, and Norway. The UK, which has a large population of people from the Horn of Africa, is in the process of banning it too.

The British Government first became concerned about the legal status of Cathaedulis in the mid-2000s and asked the Advisory Council on the Misuse of Drugs (ACMD) to provide a review of the evidence on the health effects of using the khat. The ACMD recommended, based on the review, that khat remain legal.

Not deterred by a little bit of evidence, in the lead-up to the 2010 elections, the Conservative Party announced they would ban khat and, in 2012, commissioned another review by the ACMD. Once again, the ACMD reported there was no need for a ban because there was little to no evidence of negative health effects and no evidence whatsoever that the importation, sale and/or use of khat was linked to organised crime.

Despite the two reports in less than 10 years, very little public support, legal action from Kenya and the Home Affairs Committee of the House of Commons recommending that there be no ban on khat, Home Secretary Theresa May is (at the time of printing) soldiering on with plans for scheduling the plant as a Class C drug.

And this ignoration of evidence matters, not only because of the cultural significance of khat, but because khat exports to Britain are worth about £15 million to Kenya and the industry supports almost half a million workers there.

Globally, the tide is turning on moves like this. Bolivia has been readmitted to the UN Convention on Narcotic Drugs after arguing for the right of its indigenous people to chew raw coca leaf, and other countries around the world are recognising that prohibition – especially of substances with low risk of harm – is not working.