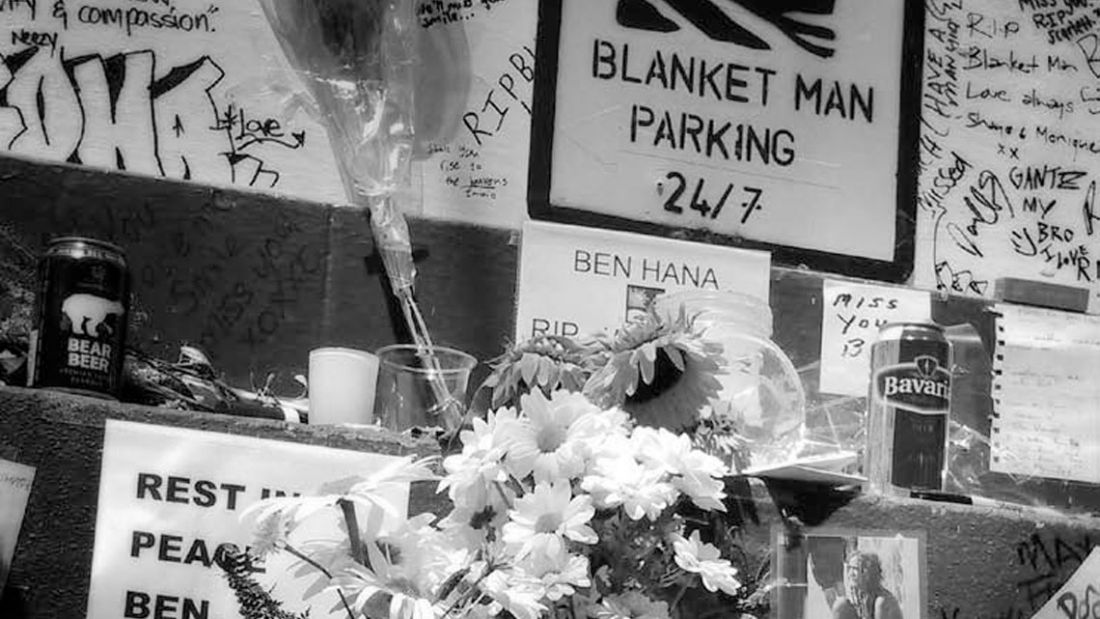 Ben Hana was seen by many as an oddity, but Wellington’s ‘Blanket Man’ was a symptom of a deeper problem and his passing a call to action. Downtown Community Ministry deals with the stark reality of homelessness, and as its director Stephanie McIntyre writes, it is time to turn his legacy into commitment.

In 2006, Malcolm Gladwell, author of The Tipping Point, captured the true story of Murray. Gladwell dubbed him “Million-dollar Murray”, as Murray had cost his home city of Reno more than a million dollars simply by remaining homeless on the city’s streets.

A little over a year ago, Ben Hana died on Wellington’s streets. Although headlines claimed “Blanket Man meant a lot to people”, we will never know what it cost our capital city for Ben to live and die homeless on our streets. Despite that claim, Capital & Coast District Health Board, the Police, the courts, the prison system, ambulance services, Work and Income and social service agencies ‘purchased’ more than a decade of homelessness for Ben – money that could have been spent on a more sustainable and compassionate response.

One year down the track, every day, people who gravely concern us pour through our doors at Downtown Community Ministry (DCM). These are people who could become Ben – who have suffered trauma or alcohol and drug dependence and who are homeless. This group is not getting any smaller. In fact, it’s growing. Twice as many people are sleeping rough in our city now as were at the time of Ben’s death. For consecutive three-monthly timeframes, DCM staff have recorded high numbers of people rough-sleeping around Wellington City. From July to September last year, it topped 50 people. From October to December, we worked with 47 people who were rough-sleeping or living in cars. Most are less visible than Ben, but nevertheless, they are out there – the homeless tip of the iceberg in our capital city. If we don’t agree on some positive solutions, there will be many more Bens.

What have we learned from Ben’s life and death? So far, Ben’s legacy has been the naming of two boutique beers ‘in his honour’ in an ad agency-sponsored competition. Perhaps this is not surprising given that, in life, one perverse way we chose to recognise Ben was through outfits for the Sevens – a celebratory sporting event now soured by our heavy-drinking culture. Sadly, we turned Ben into a clown, when his life and death could be a catalyst for examining ourselves, a catalyst for change.

DCM was one of the agencies that supported Ben, and we knew him well. We have a strong track record of working effectively with people to assist them to move out of homelessness, improve their health and wellbeing and rediscover dignity in life. While many have claimed Ben was beyond help, our considerable experience at DCM of working with homeless people has given us insight into what will make a real difference. Two things immediately come to mind – appropriate accommodation and addressing attitudes to alcohol.

The range of housing options in Wellington is limited, and the kind of accommodation on offer for people like Ben is often unsuitable. We need to look at the innovative housing that is working overseas and what has been learnt elsewhere. A starting point would be to provide a safe, communal home that does not require people to stop drinking as a precondition of living there. A home with 24-hour staffing and support, a ‘harm-reduction’ approach to reducing drinking and safe ways to keep unwelcome visitors out – something like a cross between a therapeutic community and a rest home. Overseas, in terms of breaking the homelessness cycle, significantly improving health and reducing drinking, this cost-effective solution really works.

A recent study followed 95 participants who live in a Seattle ‘wet home’ – 1811 Eastlake. Residents in the home, all of whom had previously been chronically homeless, had cut the number of drinks they consumed daily by 40 percent over the course of two years in a home that does not require abstinence.

For too long, homelessness has gone under our radar. Unlike other similar countries, New Zealand has no clear picture of the size and scale of this critical problem and lacks the political will to resolve it. Te Mahana – Wellington’s draft strategy to end homelessness by 2020 – provides a welcome opportunity to nut out ways to get a real handle on this issue and push ahead with the best solutions to prevent and address homelessness and to stop it recurring.

The draft strategy proposes a number of priorities and initiatives including “improving the supply of affordable, accessible and appropriate accommodation”. It is my hope the strategy prioritises the establishment of a ‘wet’ recovery home.

The need for the ‘wet home’ model is linked to the role that alcohol, still New Zealand’s main drug of choice, plays in chronic homelessness. In December 2012, the Alcohol Reform Bill passed into law. The government has already sent the strong message that the Bill achieved the right balance between reducing harm while not penalising ‘responsible drinkers’.

But the new alcohol legislation missed a great opportunity to make a significant difference to the damaging drinking culture in New Zealand. One of the few positive aspects of the Act was that, in theory, it shifted responsibility to local councils to give communities greater power to determine the number of liquor outlets and trading hours in their own neighbourhoods.

In response, Wellington City Council (WCC) is developing its local alcohol policy, but in a city already awash with liquor outlets, it has its work cut out for it. WCC will need to grapple with issues such as imposing a cap on liquor licences, establishing a sinking lid on existing ones and coming up with trading hours that genuinely create a safe, healthy and strong community for all Wellingtonians.

If “Blanket Man meant a lot to people”, then let’s make his legacy our commitment to ensuring that Wellington sets the example with a local alcohol policy that reflects our community’s concern for one another. And let’s make sure that, in 2013, we establish a home that even Ben would have chosen to live in.

Stephanie McIntyre is the director of the Wellington Downtown Community Ministry.

DCM was established in 1969 and was formerly known as Downtown Community Ministry. DCM works closely with other agencies and partners to address the toughest problems facing our city. More than 250 people seek assistance from DCM every month; almost half of them meet the New Zealand definition of homelessness.