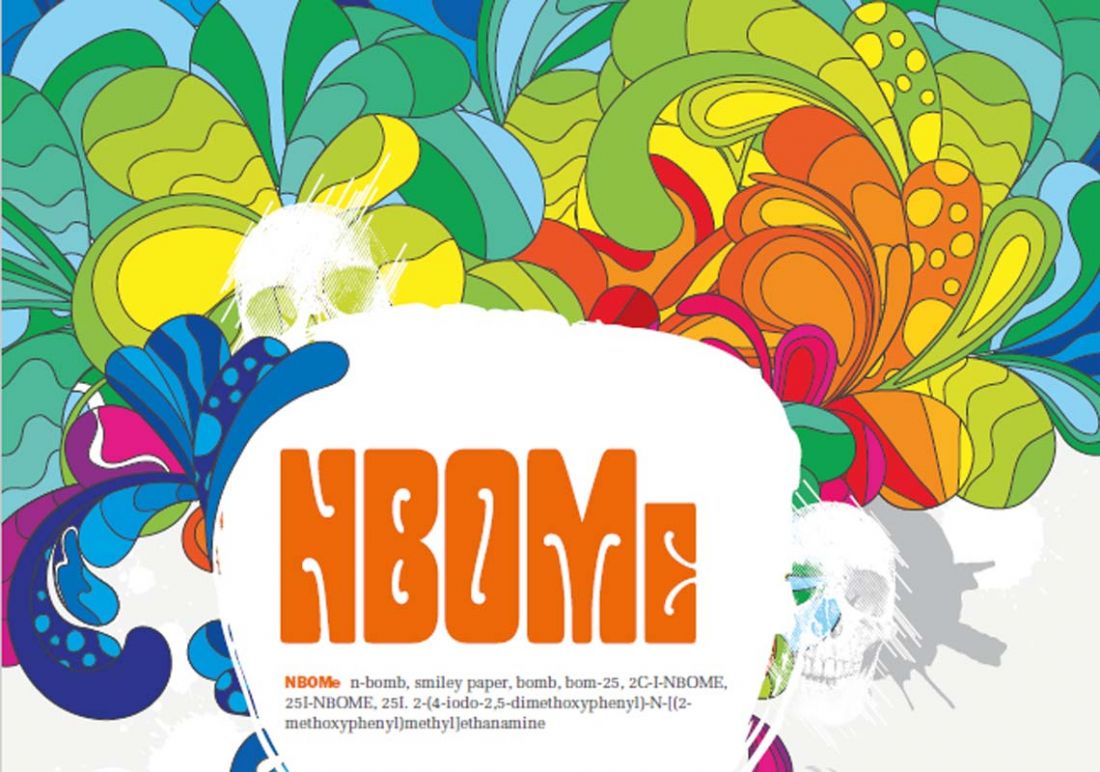 While LSD is often painted as the psychedelic equivalent of a tie-die t-shirt, the new, nefarious n-bomb is portrayed as a potent potion of peril. This new hallucinogen, often sold as acid, is another example of how new psychoactive substances are scaring the world.

A few micrograms, and you’ll be having a psychedelic trip. A few micrograms more, and you could be dead. The NBOMe family is a group of hallucinogenic new psychoactive substances (NPS) that mimic LSD. The most common member of this family is 25I-NBOMe, which was discovered in 2003 and first synthesised only a few years ago in 2010.

It’s a potent chemical that acts as a full agonist for the human 5-HT2A receptor, the receptor that other psychedelics like LSD and psilocybin hit to create the desired effects. NBOMe, however, appears to affect the receptor in a different way to anything we’ve seen before.

That’s metaphorically ‘seen’. You can’t eyeball a dose of NBOMe. Erowid estimates that the common dose is somewhere between 500-800 micrograms. This is important because the side effects can be severe and the dose-response curve is almost exponential. This means a tiny bit too much can lead to toxic overdose.

While it is mostly taken via a tab of blotter paper placed under the tongue, there have been reports of snorting. It seems snorting is the most dangerous way to ingest NBOMe, with more hospitalisations due to this method than others.

Tabs of NBOMe are often sold as LSD. This is worrying because LSD starts to take effect quicker than NBOMe, so people who are expecting their trip to start sooner assume they haven’t taken enough and take another hit. This can have serious consequences. There are a few ways to tell the difference between the two, one being a packaged testing kit that is now available in the US.

NBOMe appears to have some other serious side effects. It is a vasoconstrictor, which means it tightens blood vessels. Some people have reported this effect can last for two days, and a few people have lost extremities, even limbs, because their blood vessels became so constricted. Kidney failure, seizures, paranoia and vomiting are other issues that have been identified with taking too much. Because it is so new, we’re still not sure of all the pharmacological implications, let alone the long-term impacts NBOMe has on the human brain.

The drug surfaced in New Zealand in early 2012, with the first media reports of its negative effects occurring in March 2014. Four men were taken to hospital in Christchurch, two of whom were admitted in a critical condition, with one ending up in intensive care for kidney and cardiac complications. Luckily, the man recovered and was discharged a few days later.

The story overseas has been far grimmer, with multiple deaths being reported. As of late 2013, there had been at least 17 deaths in the USA, one in Australia, and across Europe, the EMCDDA has reported a handful of deaths and over 40 incidences of severe intoxication leading to hospitalisation from NBOMe compounds.

NBOMe has been banned in a handful of countries and more are likely to follow suit, but this has not led to any significant reduction in harm or reported availability. Even here in New Zealand where, under the Psychoactive Substances Act, NBOMe is an unapproved substance, we are seeing its ugly effects.

NBOMe has spread quickly due to a number of factors. Where a lot of focus on developing other new psychoactive substances had been put on synthetic cannabis and substances that mimic MDMA or cocaine, this was the first real hallucinogen. Consequently, it filled a gap for those seeking a legal version of LSD or psilocybin.

Also, because doses are so small, NBOMe can easily avoid detection in drug tests. This is important because platforms like Silk Road and DarkMarket make purchasing drugs online easier than heading down to your local corner store. With limited ability to detect NBOMe, the likelihood of getting caught receiving your drugs by mail is very slim.

NBOMe is the perfect example of how the merry-go-round approach to banning substances is futile and results in increased harm. With LSD prohibited, people will look for alternatives and find NBOMe. But little is known about this drug, and though it appears more dangerous, it’s readily available online despite local bans.