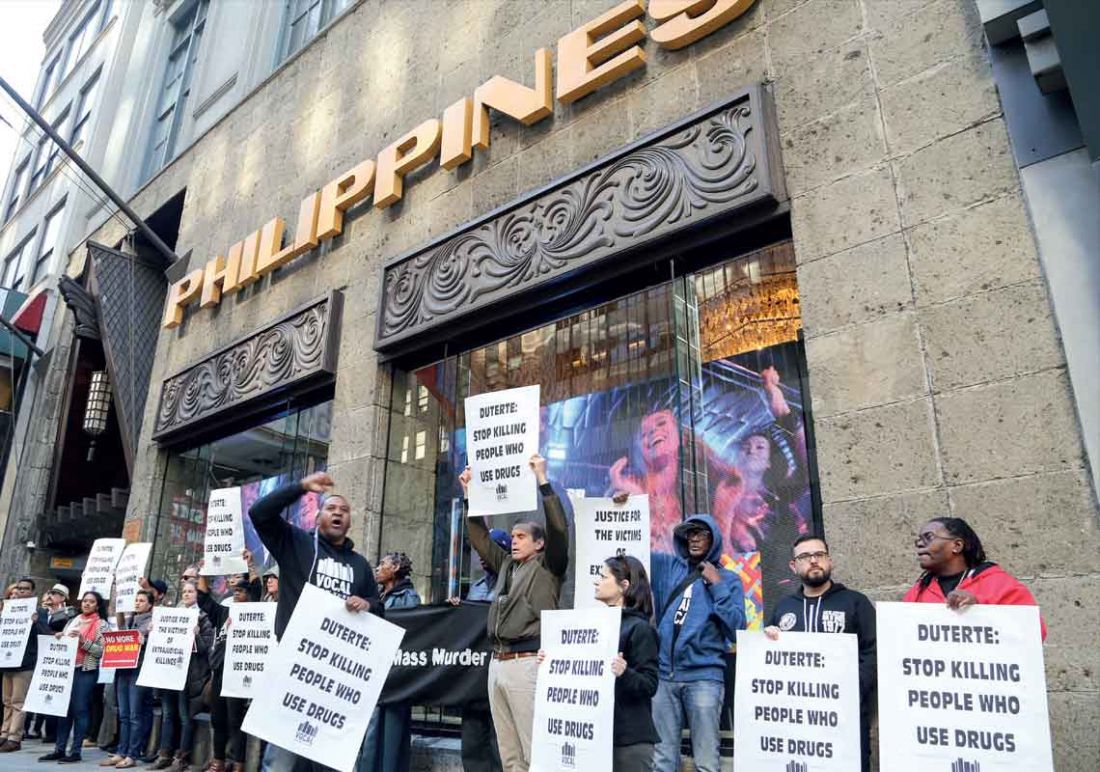 An erosion of human rights enables the brutal approach to drug policy taken in some Asian countries, says Mangai Balasegaram, but recent teen deaths in the Philippines have sparked massive public outrage, and she asks if this could mark a turning point in President Rodrigo Duterte’s bloody War on Drugs.

At 8.45pm on 16 August, Kian delos Santos was gunned down in a dark, dead-end corner in the Manila suburb of Caloocan. He was yet another statistic in a bloody drug war in the Philippines that has left about 7,000 dead. In the preceding week, 90 people had been killed.

This death of delos Santos was different. He was just 17, and CCTV footage conflicted with the account from Police, that this was “nanlaban”, a common justification for killing, meaning he resisted arrest and tried to fire back.

Witnesses told local media that a defenceless delos Santos was beaten and dragged from near his home to where he was found dead, curled in the foetal position, with bullet wounds in his ear and back. The last words of the high school student went viral: “Please stop! Please stop! I have a test tomorrow!”

Stories of a responsible, caring teenager who got up at 5.30am to help run the family store cast further doubt on Police claims.

The tragedy hit a raw nerve. It shook a public largely supportive of the deadly anti-drug crusade unleashed by President Rodrigo Duterte, who took office in June last year promising, “All of you who are into drugs, you sons of bitches, I will really kill you.”

As the carnage in the streets mounted, Duterte remained defiant. He has dismissed protests by international human rights groups and described innocent victims as “collateral damage”.

When, last year, former Justice Secretary Senator Leila de Lima quizzed the Chief of Police about all the dead suspects having resisted arrest, she was promptly charged with involvement in the drug trade and put behind bars.

Suspects are always killed in gun battles with the Police. Senior Police officers have told Reuters they are offered US$200 for every drug suspect or “troublemaker” killed.

A shift towards harm reduction

Asia’s harsh drug policies stand in stark contrast to the move elsewhere towards decriminalisation, legalisation and medical cannabis. But explosive HIV epidemics among drug users have begun forcing a shift towards a public health approach, and several countries have begun adopting harm-reduction measures such as needle exchange and methadone programmes.

In Malaysia, skyrocketing HIV rates among drug users drove the government to look beyond its punitive policies. What also helped was a report prepared by Professor Dr Adeeba Kamarulzaman, now Dean of Medicine at the University of Malaya, who had recently returned from Melbourne.

“We went knocking on doors of agencies [dealing with] drug use or HIV … Ultimately we went to the highest political leadership who gave us the go-ahead to pilot a methadone programme. The nod to do a needle exchange programme came as a complete surprise.”

In 2015, almost 100,000 injecting drug users were accessing needle exchange programmes. As a result, HIV infections among drug users are now very low. The “Cure and Care” clinics provide free, confidential, voluntary treatment, offering counselling, check-ups and methadone to nearly 130,000 people. A study last year found the rate of relapse among detainees released from government drug detention centres was almost 10-fold higher than among those treated at the clinics.

Vietnam is also shifting away from its compulsory drug detention centres, known as “06 centres”, which have been criticised for human rights abuses and have been called “labour camps” because of labour treatment such as processing cashew nuts. Some 06 centres are transforming to voluntary centres, and conditions have improved.

The rhetoric that drugs are a “social evil” is less widespread now. Instead, said a local leader of a community initiative, “We hear more and more often that drug addiction is a disease that needs treatment, especially at higher levels [of government].”

Following a successful pilot study, methadone maintenance programmes have expanded rapidly, and in 2014, they were being offered at 127 clinics in 38 provinces.

In Myanmar, a drug law review offers hope of a change to the current strict drug policies. “The new draft law that was sent to Parliament proposed to stop sending drug users to jail and instead provide them with treatment, which is indeed a big positive change,” said Tom Kramer from Transnational Institute’s Myanmar programme.

However, under the current draft, drug possession is still criminalised.

“Only drug use itself – detected, for instance, via a urine test – will not lead to a jail term but to treatment, which would be compulsory.” It is hoped the draft, which still has to go through the Lower House, will be amended.

Thus, even in Asian nations embracing harm reduction, considerable challenges and barriers remain. There are still problems with the Police and plenty of arrests and a lack of political and public support. In Malaysia and Vietnam, compulsory drug detention centres continue despite the evidence that voluntary treatment gets better results.

The illegal drug problem should not be reduced to a political or criminal issue. It is a humanitarian concern that affects all of us.

Around the time delos Santos was killed, two other teens were also found dead. Carl Arnaiz, 19, was shot controversially, and Reynaldo de Guzman, 14, was found in a creek with 30 stab wounds and his face wrapped in packaging tape, a hideous hallmark of the drug murders. Both bodies bore signs of torture.

“We knock on the consciences of those who kill even the helpless … to stop wasting human lives,” Archbishop of Manila Cardinal Luis Tagle said in a statement. “The illegal drug problem should not be reduced to a political or criminal issue. It is a humanitarian concern that affects all of us.”

The archbishop has called for church bells to toll every night around 8pm in protest, saying, “We cannot allow the destruction of lives to become normal. We cannot govern the nation by killing.”

“Ever since the recent deaths of the teenagers – Kian, Carl and Reynaldo – we have seen a lot of activity and sentiment from people who realise that these deaths are precisely because of how the War on Drugs has been carried out thus far,” said a spokesperson from No Box, which provides community services and advocates reform of drug policies and laws.

“We need to support the slowly growing number of voices joining the outcry against the War on Drugs … and to open up the space for honest conversations about drugs and the people who use them, which has always been missing.”

The discomfort around discussing drugs is rooted in a “deep-seated stigma” that is “taught to us from the very beginning” through education or the media. “If there’s anything ‘positive’ about what’s happening it is that people are willing to talk about this now and explore other ways that aren’t so negative or … cost so many lives,” said the spokesperson, who did not wish to be named. Nobox staff have tightened security. “Given the current environment … it’s difficult for anyone to not feel some kind of fear.”

Could the teens’ deaths mark a turning point in the drug war? Duterte, who has enjoyed high ratings, has since softened his tone. But he recently said that the killings – which number more than that from any global terror attack – would continue. The drug war is a central issue for Duterte, who has admitted to using the drug fentanyl.

In the big picture, a nation’s approach to drugs often reflects its state of human rights. As drug users are often at the bottom rung of society, they face the worst human rights abuses.

The Philippines has a long history of extrajudicial killings, with activists, journalists and communists killed in previous administrations.

“The difference now is that it’s now more widespread to target not just activists but ordinary people,” said Carlos Conde, Philippines researcher from Human Rights Watch, adding the country has long had a “serious breakdown in its criminal justice system, so impunity and lack of accountability persist”.

Much depends on the vagaries of political rulers and how they choose to approach drugs. Nevertheless, there are deep, long cracks on Asia’s hardline approach to drugs.

Mangai Balasegaram writes extensively on health and drug use. She won the 2000 Media Award from Harm Reduction International for reporting on drug use and was featured in a UNAIDS book on Asian leaders in HIV/AIDS for her work leading AIDS journalism in Malaysia in the 1990s.