There have been more drug checking clinics in 2022 than any other year! We now have three organisations doing drug checking up and down the country: NZ Drug Foundation, KnowYourStuffNZ, and the NZ Needle Exchange Programme (NEST).

We’ve pooled our data across all the organisations to take a look at what substances were found from August to November, and what this might mean for summer. 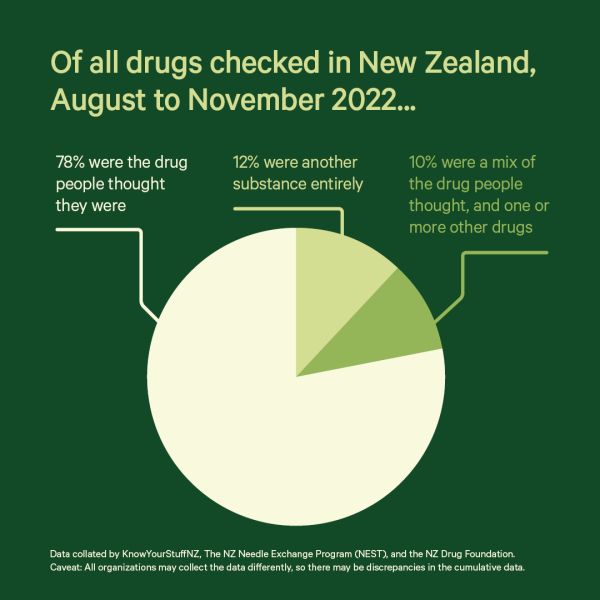 If you’re taking drugs this summer, we’d recommend that you bring them in to get checked ahead of any planned partying. Head to our calendar to find a drug checking clinic near you.

The pooled data from NZ Drug Foundation, KnowYourStuffNZ, and the NZ Needle Exchange Program (NEST) shows some concerning trends that we’ll be keeping an eye on.

We are still seeing synthetic cathinones (sometimes known as bath salts) popping up across the country. Cathinones are stimulant drugs derived from the khat plant. Eutylone is a type of cathinone that we’re still seeing mixed into or sold as MDMA. We’ve also seen 4CMC/3CMC, methylone, dimethylpentylone and 4-MEC, amongst others. These cathinones are often dosed differently to MDMA and can have unpleasant and unpredictable effects.

Top tip: There are many different cathinones with different effects. Getting your drugs checked with a spectrometer can help identify what you’ve got, unlike reagent tests. Use our calendar to find a drug checking clinic near you.

See our cathinones page on The Level for more info on the effects and staying safer.

Bromazolam and other novel benzodiazepines

Benzodiazepines are depressant drugs that are sometimes prescribed for things like anxiety and insomnia. Novel benzos are unlicensed benzodiazepines that don’t have medical uses and may be sold on the illicit market.

We’ve seen pills sold as pharmaceutical benzos, like alprazolam, that end up testing as completely different benzodiazepines, such as bromazolam. While these novel benzos share many of the same effects as prescription ones, pills can contain much higher doses, or be unevenly distributed.

Top tip: Crushing and mixing your pill can help distribute the benzo more evenly throughout the mixture. Drug checking can help you find out what benzo you have and in what quantity.

Check out the benzodiazepines page on The Level for more info to help you stay safer.

We’ve started to see this ‘cutting agent’ replacing methamphetamine recently. Though it does not have stimulant effects, people have told us it can cause some unpleasant effects such as headaches and burning sensations when injected. New research suggests isopropylbenzylamine may have toxic effects, such as causing nausea and vomiting and potentially serious skin and eye irritation.

Top tip: Yep, we can check your meth at drug checking, and nope, we don’t confiscate it if it contains something else. If you’re injecting any drug, it’s best to use a new needle each time and don’t share needles. The Needle Exchange website can help you find somewhere to get needles near you.

If you’re using meth, we’ve got info about it on The Level's methamphetamine info page.

That’s not what I ordered…

When people’s drugs had been swapped out for something completely different, the main substance the combined data showed was synthetic cathinones, like eutylone and dimethylpentylone (usually in MDMA). When they were a mixture of the presumed drug and something else, the main substance we found was caffeine, creatine (a non-psychoactive workout supplement) and synthetic cathinones.

Now, if you know you’re taking synthetic cathinones and you’re taking them on purpose, your risks are going to be lower. You know what you’re taking, so you know how much to take, and what to expect.

The top drugs that were either adulterated or swapped out completely

The drugs we see most of the time aren’t necessarily the ones that are most commonly adulterated or swapped out.

When MDMA had been swapped out for something completely different, the main substances the combined data showed was synthetic cathinones and caffeine.

When it was a mixture of the MDMA and something else, the main other substances we found were also synthetic cathinones and caffeine.

If you’re planning on taking Molly, read up on The Level's MDMA page. Or check out our cathinones page for more about bath salts.

The most common synthetic cathinone we saw was eutylone, but we also saw 3CMC, 4-methylmethcathinone (mephedrone) and dimethylpentylone amongst others.

When amphetamine had things added to it or had been swapped for something else, this was usually caffeine, methamphetamine and phenethylamine. This is risky because the mixing of stimulants can cause insomnia which leads to psychosis, and heart problems.

When cocaine had been swapped out for something completely different, the main substances the combined data showed were caffeine, methamphetamine, and creatine. We also saw cocaine swapped for drugs like ephedrine and phenmetrazine.

When cocaine was mixed with other things it was most commonly caffeine and creatine.

If coke is on the menu, check out The Level's cocaine drug info page.

When methamphetamine had been swapped out for something completely different, the main substances the combined data showed were isopropylbenzylamine and ephedrine.

When methamphetamine was mixed with other things, it was most commonly pseudoephedrine and non-psychoactive fillers.

If you’re using meth, our drug info page has info on what to expect and how to stay safer.

While it doesn’t have the dubious honour of being on this list of drugs most commonly adulterated or swapped out, we did check a lot of ketamine.

When ketamine had been swapped out for something completely different, the main substance the combined data showed was caffeine, or non-psychoactive binders such as dimethyl sulfone (MSM).

When ketamine was mixed with other things, it was also most commonly caffeine or MSM. Find out more about ket on The Level's drug info page.

Can we expect more of the same over summer?

High Alert have found MDMA to be less available and cathinones seem to be more available than they were last year.

High Alert liaises with Customs, Police, and drug checking organisations to monitor what’s available on the drug market. They’re Aotearoa’s high-risk drug early warning system, and it’s their job to spot anything high risk. They’re the ones that told us about the synthetic opioid being sold as oxycodone back in March, and have been literal lifesavers many, many times over.

Caveat: All organizations may collect the data differently, so there may be discrepancies in the cumulative data.