What would you do if someone you love was struggling with their drug use?

We want the government to take a more compassionate approach to drugs, and to support people who are struggling instead of punishing them. The Drug Foundation has been working hard for over 30 years to change Aotearoa New Zealand's unfair and damaging drug laws which criminalise people and can prevent them getting help.

In July 2017 the Drug Foundation released Whakawātea te Huarahi, a bold roadmap for drug law reform in Aotearoa New Zealand. The model drug law is based on evidence and research from New Zealand and around the world about the best way to reduce drug harm.

‘Whakawātea’ means to clear, free up, cleanse or purify spiritually, while ‘huarahi’ is a pathway, road or track. The title of our model drug law is intended to signify a fresh start for the debate on drug policy and a sense of movement towards a better future.

These goals can be achieved by:

The vast majority of people who use drugs don’t cause harm to themselves or others. But people can still be convicted of using and possessing illicit drugs. Drug convictions don’t change drug use. But they do have lifelong consequences on employment, relationships and travel.

In August 2019 there were significant updates to New Zealand’s drug laws. Police may now only prosecute a person for possession and use of drugs if it is ‘required in the public interest’. They must determine whether a health-centred or therapeutic approach would be more beneficial to the public interest instead. This should mean that more people will get the support they need, instead of a conviction for drug use.

Despite cannabis being illegal, anyone can buy it easily. 590,000 New Zealanders used cannabis last year. Our current law is clearly not working.

At the general election in 2020, we’ll all get to vote on whether cannabis should be legalised and regulated. Find out more on our Vote Yes page

In 2014/15 (the last time this research was done), we spent $273.1 million on drug enforcement and only $78.3 million on health interventions. That means we spent 3.5 times more on punishing people than we did on helping them.

50,000 people each year want help for their alcohol or drug use but do not receive it. The $350 million spent every year on drug-related issues should be targeted away from enforcement and into treatment, support and prevention.

The 2019 Wellbeing Budget allocated extra funding for alcohol and other drug treatment, which is likely to ease the pressure on the sector. This includes $14 million over four years for primary care support for people with alcohol and other drug issues, covering an extra 5,000 people a year. The budget also includes $200 million in new and existing mental health and addiction facilities. 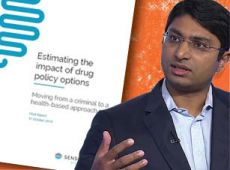