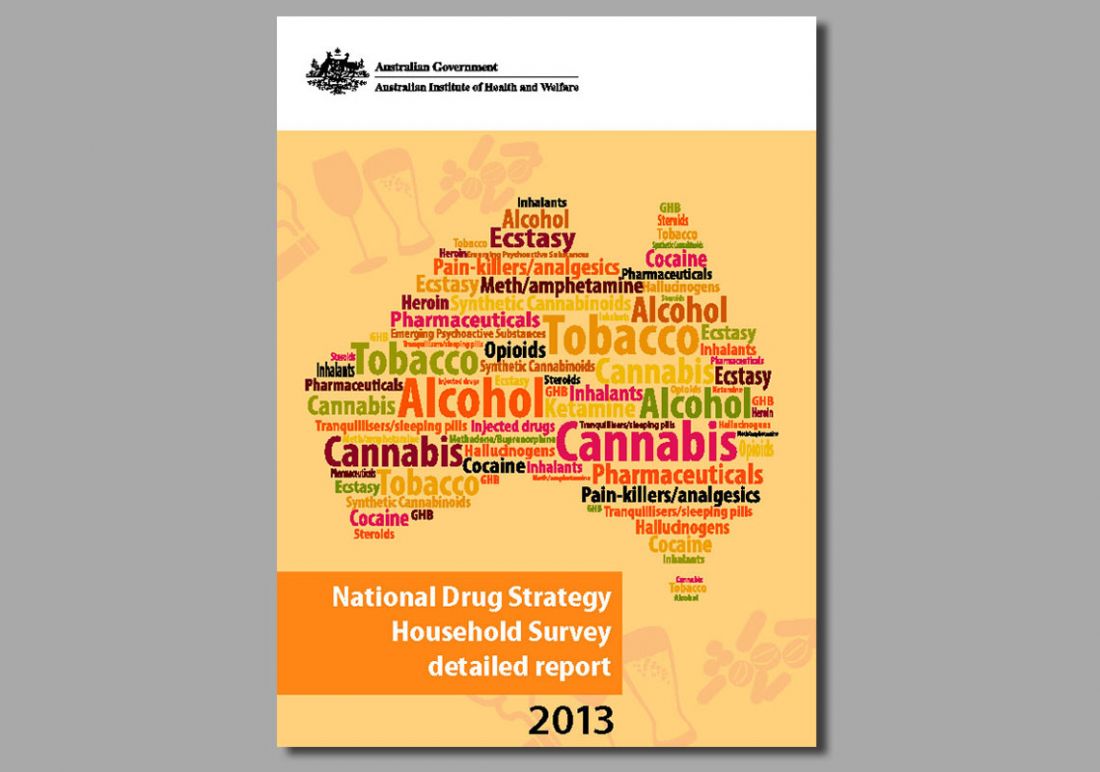 In late November 2014, the Australian Government’s Institute of Health and Welfare released its full report on the 2013 Australian National Drug Strategy Household Survey. The survey has been conducted every two or three years since 1985, and 2013’s iteration collected information from almost 24,000 people, asking them about their use, attitudes and opinions on alcohol, tobacco, illicit drugs and what they think about alcohol and drug policies. As Rob Zorn reports, the results are pretty encouraging.

The 2013 Australian National Drug Strategy Household Survey has revealed some pretty good things are happening in Australia in terms of drugs and alcohol. Methamphetamine use has remained stable, and the proportion of young people who have never smoked has risen from 58 percent to 77 percent. Risky drinking has declined overall, and about half of all drinkers have reduced the amount they drink because of health concerns.

This last finding is good news because it indicates a fair proportion of drinkers now are well aware of the health benefits of reducing alcohol consumption. But what’s particularly encouraging is what’s happened with the stats around youth. Young people are now waiting longer before trying their first drink (15.7 years of age, up more than a year from 14.4 years of age), and the proportion of 18–24-year-olds engaging in risky drinking behaviours has fallen from around 30 percent to around 20 percent. In fact, 40–49-year-olds have now replaced young people as the group most likely to drink at risky levels. The proportion of young people aged 12–17 years of age who are choosing not to drink at all has risen from 64 percent to 72 percent.

While this doesn’t indicate that everything’s rosy with alcohol and drug use across the ditch, that the majority of young people are not drinking and taking drugs is news so exciting we should be shouting it from the rooftops, according to Australian Drug Foundation (ADF) Head of Information and Research Julie Rae.

“The later a young person first tries alcohol, the less likely they are to have a problem with alcohol as an adult,” she is quick to remind.

In fact, 40–49-year-olds have now replaced young people as the group most likely to drink at risky levels.

The three big guns in combating alcohol misuse have long been accepted as marketing, pricing and availability – all three largely legislative. But Australia has not made any major moves in these areas in recent years and could hardly call itself a world leader in terms of alcohol law reform. It’s the only country in the world where alcohol is available 24 hours a day, and it still has alcohol advertising on free-to-air television. While this is usually only allowed after 8.30pm, it can feature at any time during the broadcast of live sporting events, which are often watched by children.

“So Aussie kids are seeing these ads,” says Rae, “and we know this sort of marketing has an enormous effect. British research by the Joseph Rowntree Foundation, for example, reveals kids as young as four can identify alcohol by its bottling.”

In the absence of significant legislative changes, there’s been a lot of discussion at the ADF about what the positive changes in the 2013 survey could be attributed to. And the answers are probably community awareness and culture change – often two sides of the same coin.

“We can only speculate,” says Rae, “but we know there’s more talk going on in the news about risky drinking and young people drinking.

“We know there are a lot of programmes out there looking at the risks and protective factors for young people, and we’ve got messages out there to parents that they need to set behavioural expectations for their kids.”

The ADF isn’t the only organisation working towards that culture change, but some of its programmes serve as excellent examples.

Its Good Sports programme has been rolled out across the nation to help ensure young people drink more responsibly. Sporting clubs go through a three-stage accreditation system that steps them through responsible alcohol management. It includes things like not having alcohol present at junior competitions and offering alternatives to full-strength alcohol at events.

The ADF’s Other Talk programme encourages parents to have conversations with their kids about alcohol. It uses forums and parental advisory groups to have those discussions. “We’re also working in workplaces towards responsible event management around alcohol,” says Rae.

“We just knock on the doors of these businesses and offer policy tips if they are starting to think about alcohol use in the workplace. We use an occupational health and safety approach and talk about absenteeism due to hangovers and the harms that could be done to both safety and profitability when someone is under the influence of a drug at work. It’s just basic awareness raising really.”

While it seems fairly certain initiatives like these have helped cause cultural change, Rae is quick to point out that there remains a long way to go in the Lucky Country. Alcohol still causes around 5,500 deaths and 150,000 preventable hospitalisations and costs the country A$15 billion each year.

She says legislative changes are a must if further progress is to be made.

“Alcohol needs to be properly labelled to warn people of the dangers of excessive drinking and trading hours need to be reduced in the interests of people’s health. Underage drinking could be greatly reduced if all states and territories introduced secondary supply legislation to prevent unauthorised supply of alcohol to children.

“We’ve made seatbelts compulsory even though the hospitalisations and deaths from road accidents are much less than those from alcohol, so we need to have that preventative legislation in place.”

And it seems such legislative changes would meet with the approval of the average Aussie. The survey reveals most want to stop alcohol marketing to young people. Most support a ban on alcohol sponsorship of sporting events. As many as 73 percent want alcohol advertising on television restricted to late-night viewing after 9.30pm.

So if there’s now a national palate for alcohol law reform, why is the Australian Government reluctant to act? It may be that it doesn’t think reform will be all that popular (unlikely by now). It may be that it isn’t convinced by the research and findings of its own body (it’s been convinced by much less), or the answer may be the same as it is just about everywhere else – the alcohol industry.

The industry wields its might to oppose reform on whatever front it can. For example, Brewers Association CEO Denita Warn was quick to use the survey’s findings around the decline in risky drinking to soothe public concerns around alcohol harm by saying they “dispel the myth of a growing alcohol crisis”2 despite the fact that Australia’s alcohol harm statistics are still a gruesome read.

“Unfortunately, Big Alcohol will respond to these positive figures by trying to reverse them and have people drinking more, rather than less,” says a 22 July 2014 issue of ADF’s Grogwatch.3 “Australia is still very much in the grip of a dangerous love affair with booze.”

“There’s a huge push and pull between agencies like ourselves and government policy,” says Rae. “The alcohol industry is a powerful lobbyist – and its arguments are all around the free market, creating jobs and supplying goods. Great, but our response is, ‘With what harm and at what cost?’.

“We’re finally getting somewhere, but the real fear now is that government inaction may see the foot coming off the pedal.”